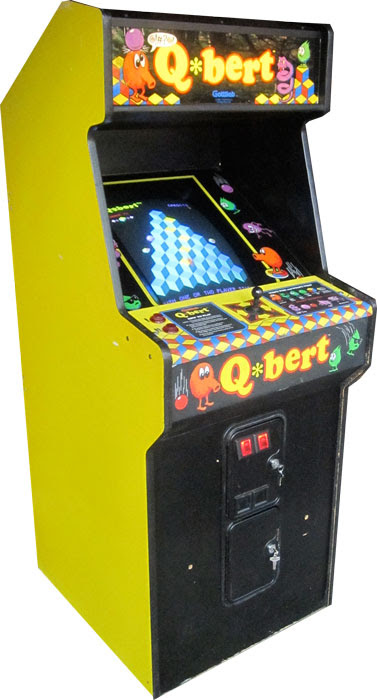 Before games were rated "M for Mature," we had the thought-bubble profanity of a large-nosed character named Q*Bert. Could we blame him for swearing after getting hit in the head with red bouncing balls and being chased by purple snakes? The real people who would end up cursing where those who hadn't thought up the idea for game, as over 25,000 cabinet games would be sold in its lifetime. Q*Bert would also jump from the arcade screen to the home console screens and even to television screens just a year after it's release in 1982. It's appeal was likened to Pacman and Donkey Kong with it's combination of lively characters and puzzle type game play. Q*Bert would soon find his way on merchandise everywhere like plush dolls, board games, and sticker books. The game would produce a few sequels, but none seemed to climb to the top of the pyramid like the original. 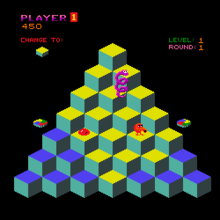 Q*Bert was a relatively simple game produced by Gottlieb. The title character's quest was to jump atop a pyramid of cubes and change each square that he landed upon to the same color. To make the game interesting, it was possible to jump off the side of the pyramid if you weren't careful. There were also enemies and falling balls that tried to come in contact with Q*Bert which would cause him to lose control over his verbal etiquette and also lose a life. To assist against these antagonists like Ugg and Coily the Sanke, two flying discs were placed on both sides of the pyramid. Q*Bert could jump on these to be escorted back to the top of the pyramid and sometimes persuade Coily to try to follow and jump off the side of the pyramid. Other enemies included Sam and Slick, who would turn the squares back to the original color. But they could easily be stopped with a good stomp to the head. 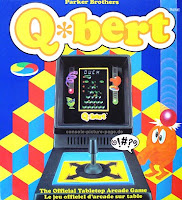 Q*Bert's arcade success developed into a frenzy over the course of 1982-83. It was quickly ported into home consoles and computers like Atari, Texas Instruments, and Commodore. Parker Brothers would translate the game to a tabletop version and also as a board game. Gottlieb also produced Q*Bert's Quest pinball, which featured flippers in a unique "X" formation. The only arcade sequel titled Q*Bert Qubes was produced by Mylstar Electronics in 1983. It featured new enemies and patterns, instead of the traditional pyramid. The sequel never came close to the success of the original. Developers also tried to release a more difficult version of Q*Bert, but the Faster Harder More Challenging Q*Bert project was cancelled. Q*Bert 3 was released in 1991 exclusively for the Super Nintendo console system. It drew upon the original arcade game with newly shaped game boards and characters. A 3-D version was also released to Playstation in 1999.

Q*Bert also received his own cartoon as a part of the Saturday Supercade show in 1983, which was a collage of mini shows featuring video game characters. Q*Bert and Donkey Kong were the only two cartoons that lasted the entire two seasons of the show. The show featured our hero Q*Bert and his dealings with bullies in the town of Q*Berg, set in the 1950s era. His girlfriend Q*Tee and brother Q*Bit as well as other friends would help him along the way. Antagonists of the show were the familiar Coily, Ugg, Wrong Way, and Viper, many portrayed by voice-acting legend and Transformers alum Frank Welker. Many tie-ins from game were included in the cartoon including block-hopping scenes, flying discs, and those "swearing" bubbles proclaimed by Q*Bert.

With the down swing in the video market during the 1983 North American video game crash, Q*Bert's popularity would dwindle. But most video game enthusiasts will tell you that it remains as one of the most influential arcade games of all time. In my book, it's one of the top ten games at the 80s arcade.

Thanks as always to Arcade-museum.com and Wikipedia.
Newer
Older