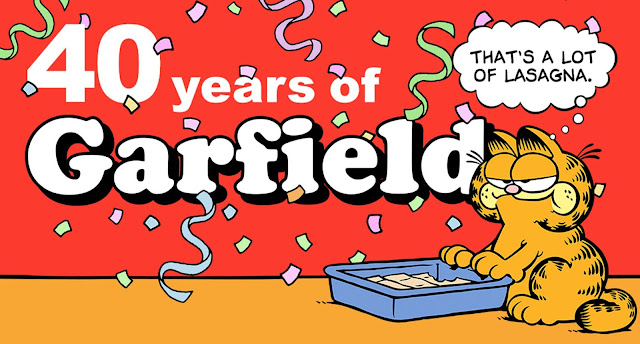 Garfield has hit the big 4-0 and is still as fat and sassy as he was way back in 1978. Garfield, his pal Odie, and Jon Arbuckle were a huge part of my childhood in the '80s. I remember experiencing him everywhere including collecting glass mugs from McDonald's, reading his books and comic strips, seeing him stuck to car windows, and watching his float pass during in the Macy's Thanksgiving Parade.

Garfield's animated TV specials including Halloween, Thanksgiving and Christmas were a must-watch for me and Garfield and Friends was a staple on Saturday mornings. I longed to have his popular merchandise in my room like his play tent and novelty telephone. But long after my days as an '80s kids, I'm proud my kids have experienced Garfield's world mainly through the 2009 animated series The Garfield Show which captured his personality, that I remembered growing up with, perfectly.

RD80s affiliate HalloweenCostumes.com have put together an infographic highlighting Garfield's life over the past 40 years. It's packed with a ton of lasagna-loving facts about one of the most iconic cats of all-time. View the infographic below and leave a comment with your Garfield memories.

Visit HalloweenCostumes.com for the best selection of costumes and accessories
Newer
Older
Powered by