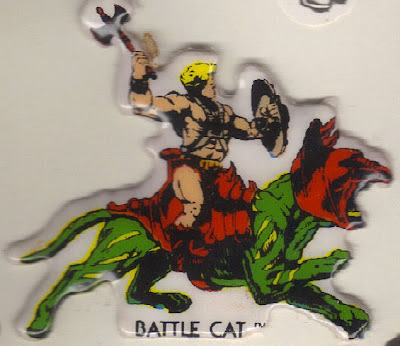 Pages 5-10 of my 1984 sticker book contain more of the beloved franchises of the '80s. I've also noticed some unique stickers that I thought were pretty cool at the time. Plus, the answer to the cliffhanger question from part 1...will my scratch-n'-sniff stickers still smell after 18 years??? 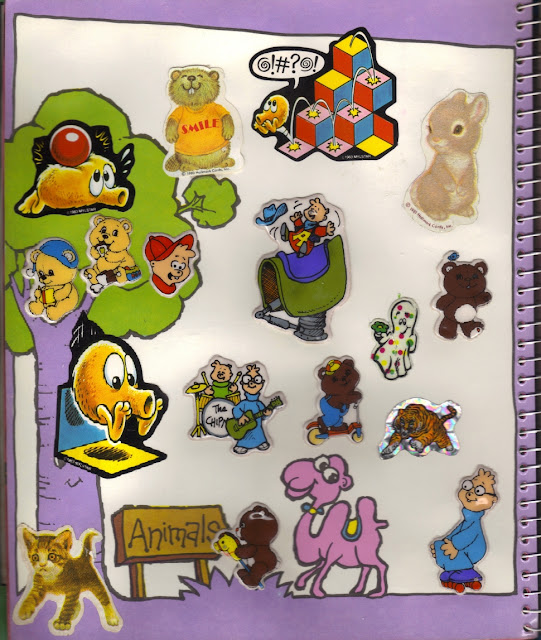 Guess I was pretty good at reading directions as a kid, as this page and the next were the "animals" pages. The only thing that is a little suspect is Q*Bert (animal?) and the spotted ghost that appears to be holding a flower. (What happened at that sticker design meeting?) I was a pretty big Alvin and the Chipmunks fan when I was a kid. I remember having a Chipmunks record album and at one point had all 3 glasses that were available at one of the fast food chains. Was also a fan of transforming 33 records into Chipmunks records by playing at the 78 speed. The bunny in the top right corner is fuzzy to the touch, which I thought was a little unique to 1984 (although, I'm not much of a sticker aficionado.) 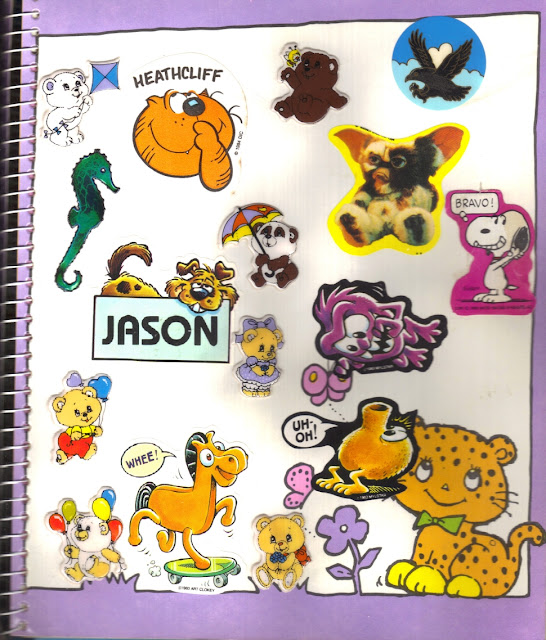 Finishing up the animal sticker collection, it seems I had the foresight to save a Pokey from the set of Gumby stickers displayed earlier in the book. Two very cool stickers on this pages are the seahorse and eagle in the upper right corner. These both have some kind of liquid inside that when touched could change color. The seahorse works the best out of both of them now. There is also a moon sticker on the next page with the same texture. Also, the aforementioned "prettiest sticker" that I told about on the inside front cover is on this page. Funny, doesn't really seem to be one of Gizmo's better poses. He looks a little sad or perturbed that you fed him after midnight. Also on this page, is it me or does it look like Heathcliff is picking his nose? 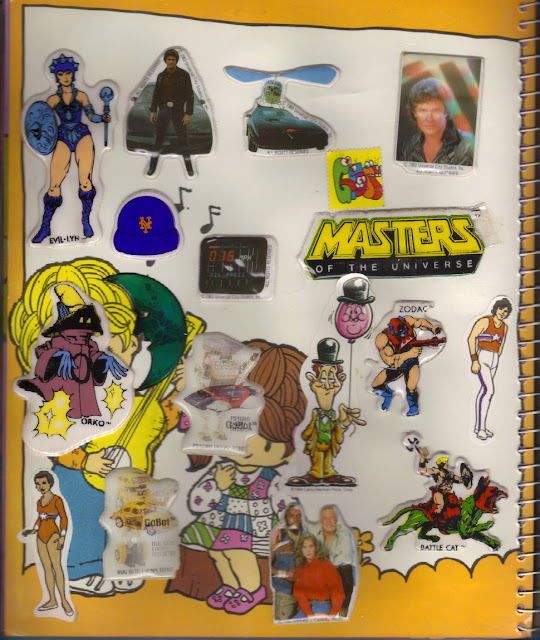 Some of my favorites on this page and the next. Masters of the Universe was always one of my faves. Other than maybe G.I. Joe, MOTU figures dominated my toy box. I like the He-man & Battlecat, Zodac, and Evil-Lyn stickers. Was very surprised to see that they actually had A-Team stickers with the girl! You'll also notice a few gymnasts from Mr. T's cartoon show and some great Knight Rider stickers. Also, loved the transforming GoBot stickers. One you might find out of place is the "gross" sticker above the MOTU logo...that's there because that's my last name! 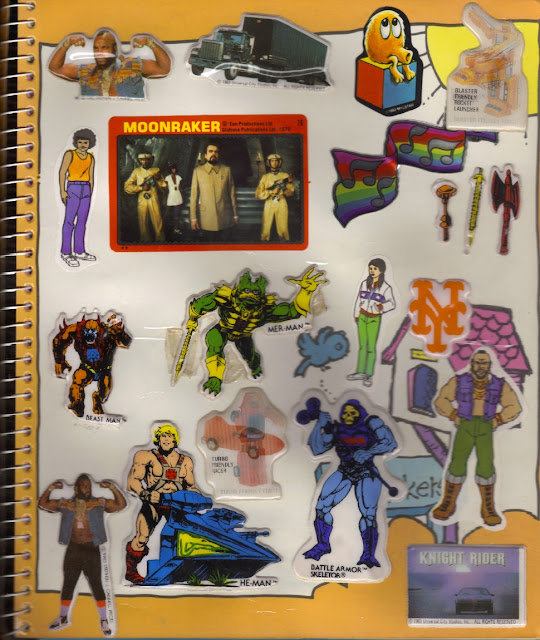 More of the same on this page, including those random New York Mets stickers that I can't quite seem to figure out (I do remember watching games on WWOR which was one of our cable channels. The Moonraker sticker, which is a 1979 James Bond movie, is quite puzzling. I remember having the stickers and cards, but seems odd that I'd have them five years after the movie was released. Anyway, the memory stuck with me and about 15 years ago while I was in college, managed to get my hands on a complete set. (Still own them!) 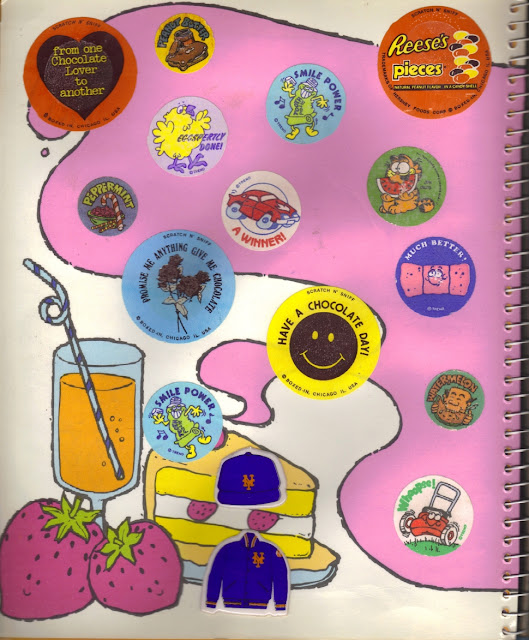 And now the moment you've all been waiting for...the scratch-n'-sniff collection! And yes, some still do smell! Unfortunately, the ones that did hold the test of time were the ones that aren't the most appealing smell. None of the chocolate or the food type stickers lasted. The fresh cut grass, toothpaste, band-aid, and new car all smelled just as I remembered. The random NY Mets uniform however did not smell like Mookie Wilson, Sid Fernandez, Daryl Strawberry, or any of the players from the 1984 team. 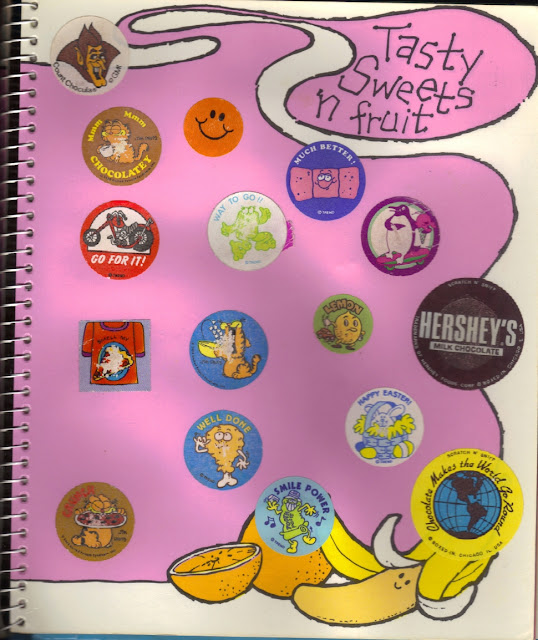 I had some success with chocolate this time, but not the larger ones. Count Chocula and all of the Garfield stickers still had their smell. You can tell my favorites were the ones that had been partially scratched away. Some were as utterly disgusting as I remembered. The chicken leg...let me tell ya, Colonel Sanders would have gone out of business if fried chicken smelled like that. The other one that smelled as if it was brand new was the motorcycle. Here's a question for Regis Philbin: WHO WANTS TO SMELL A MOTORCYCLE? Burnt rubber, yeah let's do that smell...gag. No luck on the lemon, the Easter basket (no idea what that was supposed to smell like) or the penguin with the ice cream cone. The other one the puzzled me was the green guy. It's not a frog...looks more like a booger with appendages. I'm thinking it was possibly one of the Nerd candy characters...at least, I'm hopeful it was.

8 more pages left in my sticker book! In the final post, I'll show you a few holiday stickers, wiggle eye stickers, and my "favorite" classic car stickers. You'll also see an appearance from the Cabbage Patch Kids, a Cincinatti Bengal quarterback, Batman, and more New York Mets randomness. And, the final heart-stopping question...did I put stickers on the inside back cover with a clearly displayed warning?