In the wake of mid 80s action movies like Rambo: First Blood Part 2 and Commando, arcades followed suit with some pretty cool shoot 'em up type video games to feed our need for carnage. The development of the light gun into games, such as the Nintendo zapper gun, broaden the possibilities for scrolling and gallery shooting games. Taito's Operation Wolf stormed its way into arcades in 1987 to great reception from both critics and gamers alike. Winning several awards and spawning three sequels, Operation Wolf definitely has that "initials quality" about it and a game I could pour quarters into and never tire of the game play. 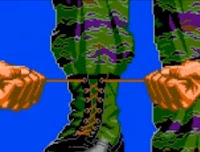 I am a huge fan of John J. Rambo and have been since I was a kid (probably why this game appealed to me so much.) Operation Wolf probably could have been titled "Operation Rambo," because there were many similarities to First Blood Part 2. The beginning of OW featured a soldier strapping on his boots and attaching gear like knives and grenades ala Rambo, and then lock-n-loading his uzi machine gun. The operation? To rescue hostages inside a concentration camp and... BLOW STUFF UP including tanks, helicopters and anyone pointing a gun in your general direction! 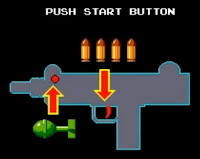 Operation Wolf had two main elements that put it in a league of its own among shooting games. The first was the gun and controls. Just something about having that uzi in your hands that made me feel like Hannibal shooting out the back of the A-Team van at the bad guys. Force feedback in the controls made it feel like real recoil when firing. Plus, a grenade launcher! A little red button on the side of the gun allowed players to launch grenades at the jeeps, choppers, and boats that annoyed you. Without unlimited ammo, clips and grenades had to be found within the game to keep from being eliminated by the enemy.

The second element that held Operation Wolf above the rest was a story line throughout the game. It was one of the first shooter type games to feature one. There were six stages you had to defeat in order to rescue the hostages: Communication Setup, Jungle, Village, Powder Magazine, Concentration Camp, and Airport. Upon completing each stage, the story advanced as if you were in a real special operations mission. Critics agreed the Operation Wolf held a higher standard at the arcade and it received several Golden Joystick awards including Best Overall 8-Bit Game. As far as sales, it ranked 2nd behind Robocop, which outsold every game for about a year stretch.

Operation Wolf would become one of the most ported games to consoles and computers of all time. Ironically, only the NES and Sega Master System supported light gun play to give it the true arcade feel at home. In 1988, Operation Thunderbolt hit arcades as a sequel. Crash magazine would vote it the best graphics of the year. The story line was also loosely based on the real events of a 1976 American hostage rescue mission in Uganda. The 2nd sequel, Operation Wolf 3, was released in 1994 and had considerable changes to the first two games. It featured side-by-side action to play with a friend, but used unlimited ammo opposed to earlier games. A pump slide was also used to fire grenades instead of a red button. The final sequel, Operation Tiger, was released in 1998 and continued the side-by-side two player action. However, it reverted back to the traditional style of play with limited ammo and accessories. The original game has also been featured in classic Taito compilation games on modern day consoles like Xbox and PS2.

Now, who's ready to blow some stuff up? Well, if wanna have a go at the Nintendo version of Operation Wolf, click here!