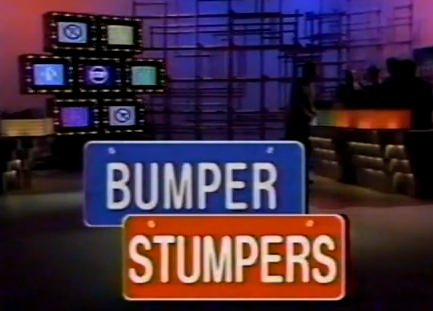 The show that turns a highway hobby into challenging fun for you!

If Jeopardy didn't tease your brain enough and if spelling wasn't your best subject in school, then Bumper Stumpers was the game show for you! We've all had that moment when we've been driving and nearly wrecked the car, trying to figure out the vanity license plate in front of us. Bumper Stumpers removed the danger of solving plates on the highway and conveniently brought it to your living room. (Note To Self: Create game show based on texting.) Two sets of contestants battled through "Jump-Ins", "Super Stumpers", and annoying car horn sounds to get to the bonus round and win the perfect prize for an automobile themed game show...a new car! WHAT?? They DIDN'T give away any cars? Sadly, the max prize in the bonus round ranged from $1500-$2000. Of course, that was decent money 25 years ago, but was still just a down payment for new car.


HRSD411
Tic Tac Dough host Wink Martindale came up with the idea for the show, which ran from 1987-90. The show was produced in Canada (Note to self: Move to Canada and pitch aforementioned texting show) and shown in the United States on USA network. The show's host was Quebec native Al Dubois who began his career as a weather and sports reporter for Canadian station CKMI. Toss-up puzzles that either team could answer, or "Jump Ins," were the main focus of each round. Each "Jump In" solved gave the team an opportunity to reveal part of the "Super Stumper" plate to win the game. Two wins and it was on to the bonus round. Make it to the bonus round five times and you got to leave as a Bumper Stumper Thumper (Yes, I just made that up.)

NOTA TMR
I remember watching the show, mainly because I lived on the USA network in the late 80s and early 90s. I loved watching all the game shows in the afternoon and of course, the USA Cartoon Express. Bumper Stumpers definitely was not one of my favorites mainly because my brain didn't work fast enough. About the time I did get into the groove of solving the plates, the 30 minute show was about over. And for the amount of brain power exerted, the prize money to me didn't match the tumor-sized headache. But nonetheless, the show occasionally still comes to mind when a vanity plate stumps me in traffic.

BNS RND
So how about a little Bumper Stumpers challenge? Here are some plates I pulled from screen shots with the clues to their owners (some of which I added a personal touch.)
Let's see if you can solve them!!