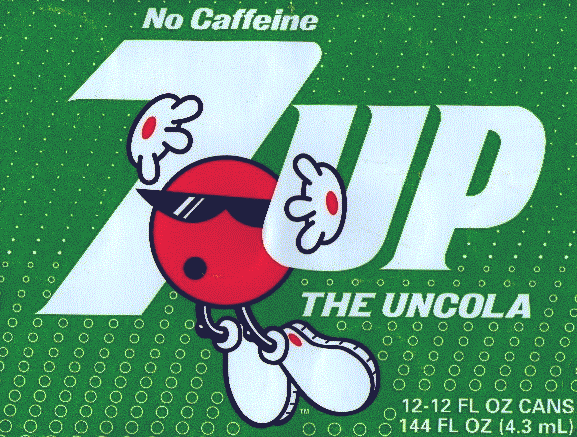 Before "Ridiculously bubbly." Before "Are you an un?" or "Make 7 up yours," the original "uncola" 7UP turned the red spot in their logo into a popular advertising campaign. "Cool Spot" would appear in several TV ads from the late '80s through early '90s, but it wouldn't stop there. The anthropomorphic red dot would be featured on merchandise everywhere and even get its own video game!

Cool Spot hit televisions everywhere in 1987, but it wasn't the first time that 7UP's red spot had come to life. In 1982, 7UP took the popularity of the video game Pac-man and turned it into a popular television ad. Pac-man is seen using bottles of the uncola as his power-ups to defeat the ghosts and quench his thirst after chomping pizza and an ice cream cone. Add in revised lyrics to Kim Carnes' hit song "Betty Davis Eyes" and you have one awesome '80s TV commercial...

The Rebirth Of Spot

Five years after the Pac-man ad, 7UP's logo came to life again. Cool Spot was shown surfing on a 7UP bottle being tossed in the ocean by two men on separate deserted islands. In another ad, Spot gives a quarter to a subway saxophone player. Soon after it was a duo of Cool Spots appearing in ads. They appeared carving a an ice sculpture during the holidays, having a swashbuckling fight during a wedding reception, and my favorite was draining the cola out of a glass to make 7UP. Spot was everywhere after that, appearing on t-shirts, hats, toys, and novelty items everywhere! 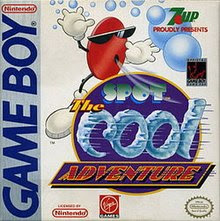 In 1990, Cool Spot hit video game consoles for the first time. Spot: The Video Game was similar to the Reversi board game with an animated Spot moving pieces along the board. A few years later when Gameboy was insanely popular, Spot got a second chance in early 1993 with Spot: The Cool Adventure. This game really brought Spot to life in similar fashion to the popular Super Mario Brothers games. Spot could pick up and throw ice cubes at enemy snails and collected spots instead of coins. It was a step in the right direction and soon after in the summer of 1993, Cool Spot was ported to popular game systems like SNES and Sega Genesis. In the spirit of the Mario Brothers and Sonic the Hedgehog, Cool Spot gathered red spots and used soda bubbles to fight off hermit crabs and bees as you made your way across the beach. I remember playing it and being a pretty popular game that year. The Cool Spot game would also be ported to all major video game outlets of the day like Amiga, Gameboy, GameGear, and Sega Master Drive. A few years later, Cool Spot got another sequel on Sega Saturn and Sony Playstation tilted Spot Goes To Hollywood. This game featured more 3D action, battling on such stages as a pirate ship.


Born in the '80s and played out in the '90s, Cool Spot remains an important part of soft drink advertising history.
Newer
Older
Powered by