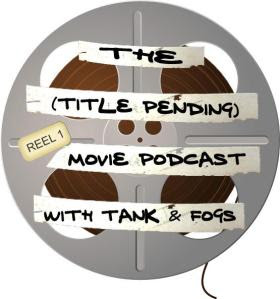 I had a chance this week to make another guest appearance on one of my favorite podcasts, the (Title Pending) Movie Podcast with hosts Chris "Tank" Tanski and Dan "Fogs" Fogarty. I've been a fan and frequent listener of the show for a long time so it was a real treat for me. They never cease to entertain each week and always go above and beyond just reviewing the latest movies.

This week I was invited back to share my love of music with the two movie buffs and talk about movie soundtracks. However, it's not the TPMP style to just sit down and talk, so I decided to first test Tank and Fogs' movie knowledge with a game show called Name That Movie Scene. My alter ego, game show host Blink Dartinmale, gave the contestants a song title and they had to match it up to the movie in which it appeared. It was a lot of fun to put together and made for a great listen (if I do say so myself.) You'll have to tune in to see who came out on top.

We capped off the night with a quick round robin of our favorite movie soundtracks. CURVE BALL! Instead of a predictable 80s list of soundtracks like Purple Rain, Top Gun and Dirty Dancing, I went way out into left field and pulled some soundtracks I've enjoyed outside of the 80s realm. One is the City of Angels soundtrack that I've pretty much loved since it came out in 1998. From the outset of U2's "If God Will Send His Angels," this album is just unbelievably good...