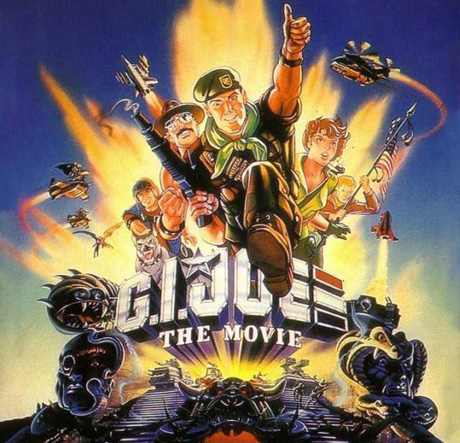 Most of us children of the 80s will be headed to movie theaters this weekend to watch the new G.I. Joe: Retaliation movie. After months of waiting and wondering why the released date was pushed back, we finally get to see if the finished product was worth the months of agony.

If you're like me, you probably weren't completely satisfied with the way that G.I. Joe: The Rise of Cobra turned out and are eagerly waiting to see if this new sequel will measure up to our nostalgic expectations. In anticipation of the new film, I'm inviting everyone to rediscover the G.I. Joe: Real American Hero series this week to get in the proper mood. If you've got Netflix streaming, you can add all 95 episodes of the animated series to your queue or you can watch the full G.I. Joe: The Movie on Youtube!

As a refresher, the movie was released in 1987 which was four years after the original 5-part G.I. Joe: Real American Hero mini-series debuted. Due to production delays and poor performances by other theatrical releases like Transformers: The Movie and My Little Pony: The Movie, the film was released straight to home video. It was also broken into a 5-part miniseries for TV syndication. Another adjustment made to the film was the death of Duke. Due to the backlash of Optimus Prime's death in Transformers: The Movie, writers altered the original script that originally had the Joe leader die and instead, had him slip into a coma and recover at the end of the movie.

Rediscover the full movie below featuring the voices of Don Johnson and Burgess Meredith. I look forward to hearing everyone's reaction to the new film next week. Yo Joe!

Sorry, you are too late!! Youtube has pulled the video.
Newer
Older