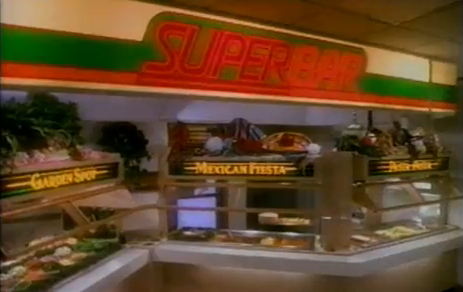 I received some great feedback since the first episode of the Rediscover The '80s Podcast that was released last week. I really appreciate the great response and comments left on both the site and on Twitter. In what I hope will be a recurring segment, Podtalk will be follow up reactions to the current podcast's topics. This first Podtalk article actually comes from a listener!

Kevin Hellions, creator of the geek site TeamHellions.Com, approached me earlier this week in response to the Food topic from the RD80s Podcast 1. I asked our panel the following question: Which fast food item that began in the '80s would you like to see make a comeback? The choices were the McDonald's McDLT hamburger, The Wendy's Superbar buffet, or the Taco Bell Choco Taco. Of the eleven panelists, only Wyatt chose the Wendy's Superbar. Well, move over NBA basketball star Rex Chapman! Kevin thinks this is an outrage and has presented the following article in defense of the Superbar!


In Defense Of The Wendy's Superbar
by Kevin Hellions

While listening to the inaugural Rediscover the 80s podcast, (and if you haven't listened to it yet, you really need to. Just a groundbreaking idea.) I was stunned when Jason asked the panel which 1980s fast food item would you like to see come back...and only one picked the Wendy's Superbar! This is a downright travesty.  You can keep your McDLT.  Begone with your Choco Taco.  The real mother flippin' deal is found on three tables full of hot and cold freeze dried foods affectionately known as the Wendy's Superbar.


I was a total Al, in the mood for everything. But twenty years later (give or take,) I can still tell you every item that I loved on that delicious, delicious buffet. The joy starts the moment one walks into Wendy's. I'll be honest, no one who was in their thirties or older is going to have the same fond memories. So lets start over.  The joy starts the moment you walk into Wendy's with your family, weaving through the velvet ropes (or if you're lucky, the metal bars) of Wendy's crowd control lines. To this day, it is the only fast food chain I've ever seen with such a thing. It created such a sense of immediacy. "We have to get there Mom! We might have to wait in line and then all the good food will be gone!" That never happened, but ropes and bars meant long lines to a kid. (That's the lesson of theme parks.) It was luck and honor to not have to wait in a line, and that's how we felt every time Wendy's didn't have a line out the door.

Before Mom or Dad paid for your meal there was the TALK. "How many trips will you make?" See, the Superbar had something weird...two payment options, one trip and unlimited. (Kind of like Ruby Tuesday's currently does but with more lighting and bigger burgers.) I can remember far too many times when my brother and I convinced our Mom that the unlimited would be worth it...only to eat one plate and a desert.  To be fair, we did not yet know how to get the most out of a buffet bar. Don't load up on carbs first. If you do, then you're full after one plate. Vegetables first! And there were plenty of vegetables but they were inside the horrible food concoctions only possible within the Superbar. Lets take a look from right to left. 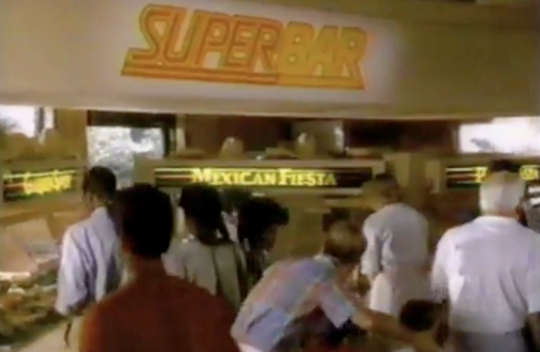 To the far right of the Superbar is the pasta station cleverly known as "Pasta Pasta". This was crap. No one wants spaghetti, macaroni, and other unidentifiable pastas sitting in wet tins. The sauce wasn't anything to go back for either. It was the Little Caesar's pizza sauce of spaghetti sauces. I once dated a girl who worked at Wendy's and had to restock the Superbar (Not why I dated her.) She claimed most of the items came in freezer packed and/or dehydrated. I'd believe everything on the Pasta Pasta station was a powder until tap water was added. Well, almost everything because there was one good thing about this section of the Superbar. The garlic toast. 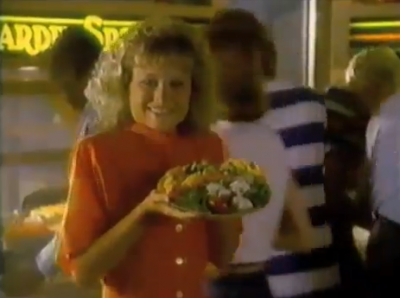 Garlic toast is not accurate by any means. Sure that's what it was called, but in reality it was a Wendy's hamburger bun cut in half and then sprinkled with butter, garlic powder with enough salt to kill slugs...All of them. These delicious half circles could be eaten plain or, as we discovered, used to make mini taco burgers. But that is the next stand. 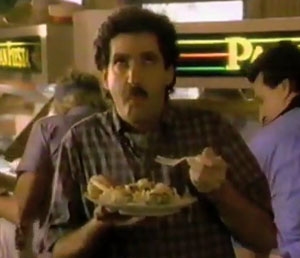 Over to side two and its time for Mexican Fiesta featuring taco shells (broken ones marketed as taco chips) and some limp tortillas you could build as many tasty tacos as you please. Plus you had lettuce, tomato, cheese, peppers and all the sauces (I don't know why more salad bars don't have taco stations.) Taco salad is still salad right? It is when you combine the Mexican Fiesta with the Garden Spot! 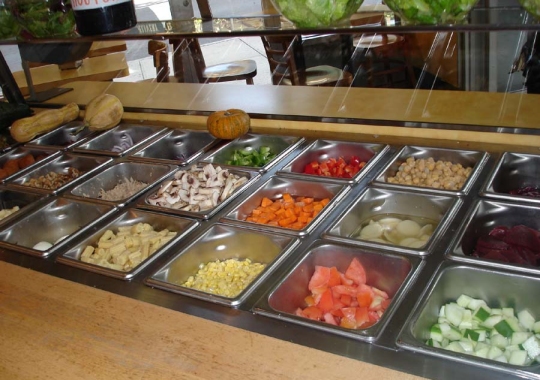 The Garden Spot was the last stand of the Superbar and this is where the magic happened. By combining the different cuts of lettuce and tomato throughout the Superbar, the ultimate salad could be made. I hate ordering a salad and its 90% cheap iceberg lettuce. So many salad bars have huge leaves of lettuce that just lay there covering the entire plate like a tasteless blanket. However, the taco lettuce is cut very thin and had a higher turn over rate than the cheap stuff. To flip the script, as the kids say, the huge slices of tomatoes are much tastier than the pureed mess on the taco side (I'm wiping the drool as we speak.) A heaping plate of this and a stack of garlic bread and its no wonder I only made one trip. Well one and a half...It's dessert time!

Behind the Garden Spot was an area that held salad dressings, stale cookies and two kinds of pudding.  The two varieties, chocolate and vanilla, led to so many hours of my brother and I giggling our fool heads off and frustrating the hell out of our mother. Which ever one of us finished our plate first would then rush up the the dessert part and make the following: Take a bowl and nearly fill it with chocolate pudding. Then put two globs of vanilla side by side, oval shapes. Dead center in between those two, a dollop of chocolate. Bring back to the table and set it down with a thwap! Be sure to make the whole thing jiggle a bit.

Now you may ask why. If done correctly this mixture ends up looking like two huge flabby butt checks squeezing out a poo. It is by far one of the most childish immature things I used to do and I still laugh to this day about it. In fact, I attempted to recreate it the other night at a Chinese buffet. Just for you! 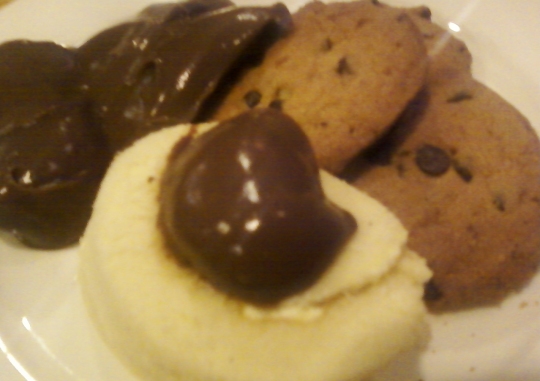 LOL! Thank you Kevin for a hilarious article. The Superbar has been defended to the max! Now, I'm pondering whether I should show my boys the next time I'm at Golden Corral. Yeah, think I'll pass as they have become armpit fart aficionados and really don't need more encouragement.

Please visit Kevin's site TeamHellions.Com for everything geek. And if you haven't listened to Podcast 1 yet, check it out this weekend on iTunes, Stitcher or just visit the complete show notes for Episode 1 to get all the details on the topics, guest panel, and music used in the podcast.