40+ Movies You Might Not Know Were Adapted Into Comic Books 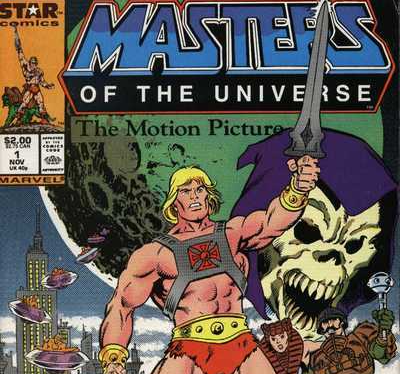 Movie adaptations of comic books has seemingly dominated the box office over the last several years. Superheroes movies are definitely not a new trend, but with juggernauts Marvel and DC Comics producing several big budget movies a year, it seems there is no end their popularity.

With the explosion of the genre, my interest in comics has grown as well. I wasn't much of a collector when I was a kid in the '80s, so the world is relatively new to me...and I like it. Not knowing where to begin, I thought a good strategy to buy comic book titles would be to start collecting comics featuring my favorite characters and shows like Thundercats, The A-Team, M.A.S.K., G.I. Joe, C.O.P.S. and Transformers.

In a recent search, I stumbled across some comic book adaptations of movies, kind of the reverse process of what we've been witnessing in theaters. The novelization of movies has been quite popular for decades and from what I gather, they add interesting new elements and scenes to the movies we now know by heart. After reading some reviews, it seems comic book adaptations can also have this tendency.

After doing some research to find what movies were adapted to comics, I was quite surprised to find such a large number that were printed in the '80s. The list I'm about to present is definitely not complete (and doesn't include any adaptations printed in 90s and beyond,) but hopefully will give some of you the inspiration to collect your favorites as it has for me.

Raiders of the Lost Ark (1981, Marvel)
Beginning with the adaptation of Raiders of the Lost Ark in 1981, Indiana Jones has become a viable comic book character over the years. In fact, all three '80s films received multi-issue adaptations by Marvel as well as The Young Indiana Jones Chronicles and new stories published in the '90s by Dark Horse Comics.

The Empire Strikes Back (1980-81, Marvel, 6 issues)
Marvel inserted the official movie adaptation of Empire into its regular Star Wars series beginning in 1980 (issues #39-44.) However, Return of the Jedi would get its own 4-issue volume beginning with the Oct 1983 issue.

Howard the Duck (1986-87, marvel, 3 issues)
I honestly had forgotten that Howard the Duck was orginally adapted from comics that date back to the mid-70s.

For Your Eyes Only (1981, Marvel)
James Bond entered the comics world in the 1960s in the UK, but didn't surface in the US until Marvel adapted For Your Eyes Only and Octopussy for its Super Special series in the '80s. Marvel also released a 2-issue adaptation of For Your Eyes Only. Eclipse Comics later received the rights to adapt License to Kill in 1989.

Supergirl (1985, DC Comics, 1 issue)
I guess it shouldn't come as a surprise that anything "super" was originally adapted from comics, but for a novice like me, I had no clue the Supergirl film as well as Superman III & Superman IV had official adaptations.

Gremlins (1984, Marvel, 1 issue)
It appears the adaptation of Gremlins was released only in the UK, while the US settled for an illustrated version by Western Publishing (Golden Book.)

Robocop (1987, Marvel, 1 issue)
All three Robocop films were adapted to comics via Marvel with the character receiving several different original releases over the years by Dark Horse and currently Boom! Studios. The new remake also received an adaption in Feb 2014.

Batman (1989, DC Comics, 1 issue)
Again, given Batman's rich comic book history, this shouldn't be a surprise to most. Though it does appear that two issues were released with different covers, maybe a special in the regular series and a "one-off" book?

Who Framed Roger Rabbit? (1988, Marvel, 1 issue)
Thanks to the success of them film, Disney published an 18-issue volume beginning in 1990.

Masters of the Universe (1987, Star Comics - Marvel, 1 issue)
I thought this cover was very interesting. Even though this is the motion picture adaptation, Marvel chose to draw He-Man, Teela, Man-At-Arms, and Skeletor with their traditional look. The new characters from the film also appear on the cover, but it makes me wonder if they didn't like the "new look" of the main characters in the film.

Conan: The Destroyer (1985, Marvel, 2 issues)
Conan The Barbarian has been a staple in the comic realm since 1970 and it should come as no surprise to fans that the 1985 Arnold Schwarzenegger film was adapted.

Ghostbusters II (1989, Now Comics, 3 issues)
This might be the coolest idea for a comic adaptation that happened in the '80s. With the overwhelming popularity of The Real Ghostbusters animated TV series (and comics,) Now Comics inserted the likenesses of the cartoon characters into the Ghostbusters II movie story. A limited collector's edition issue was also released.

James Bond: The Living Daylights (1987, Titan Books, 1 issue)
This issue also includes The Man With the Golden Gun and is the first issue of a 4-volume set. Issue #2 includes Octopussy and Issue #3 features The Spy Who Loved Me.

Many thanks to ComicVine.com and ComicBookDB.com for the images and info.