Retro Con 2015 featured several celebrities plunked directly from our childhood. I'm personally not one that gets too "star struck", especially when I see the price tag that some A-listers charge for a simple photo or autograph. But what I really enjoyed about Retro Con was that all the special guests were geared directly toward its theme of retro franchises and toys. Wyatt and I had the privilege of meeting several of our childhood heroes, each of which were very personable and happy to pose for a quick picture, sign an autograph, or even tell us a story. 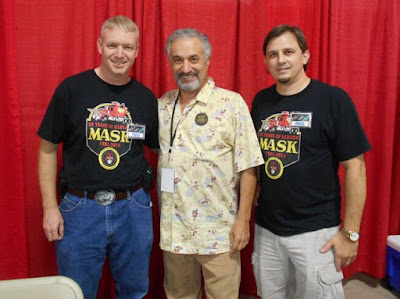 As I mentioned previously, our main motivation for attending Retro Con this year was participating in a M.A.S.K. panel with Matt Trakker himself (and many others,) voice actor Doug Stone! I was sure that Doug was going to be sick of us by the end of the day, for as much time as we hung around him. He was very gracious to share his experience and stories throughout the day. I tried to be mindful of other attendees and had to pull myself and Wyatt away from his table on a couple occasions. Doug signed a large poster for me and a couple other prints and small items for Wyatt and our other M.A.S.K. friends. 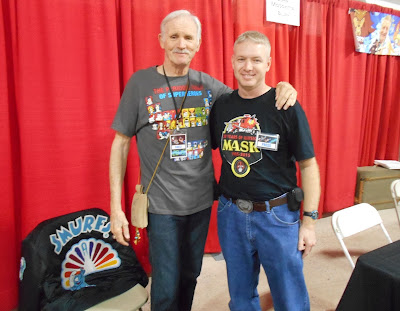 Also in attendance was voice actor Michael Bell who portrayed several characters in G.I. Joe: A Real American Hero, Transformers, The Smurfs, and Super Friends. We both grew up with pretty much all of his '80s shows so it was a real privilege to meet him. He's also probably the only person on the planet that looks totally rad in the Smurfs jacket he wore to the show. Wyatt's main motivation for the meet-and-greet was to discuss Voltron for which Michael voiced the character Lance. 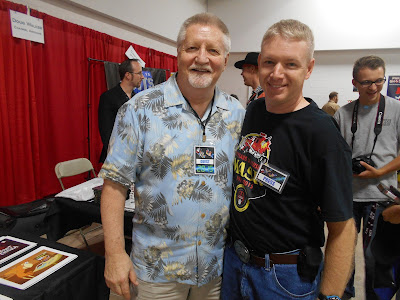 Another fun visit was with Larry Kenney who best known to our generation for voicing Lion-O and Jackalman in the Thundercats and Lt. Colonel Bluegrass in the Silverhawks. What Wyatt and I hadn't realized until we talked with Larry was that his career work was so vast and included radio work and several TV commercial characters like the Cocoa Puffs' Sonny the Cuckoo Bird and Count Chocula. 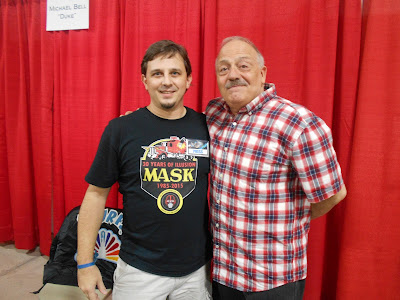 Before our day was done, we also got to chat (very quickly) with John Moschitta, Jr. who is known for his Guinness World Record speed talking skills and voicing the character Blurr from Transformers. Of course, you'll also recognize him as the Micro Machines Man who was the TV commercial spokesman for Galoob's small vehicle toys for several years. John was very forthcoming in our short chat and it felt like he was a distant relative that I was catching up with after several years. After our initial chat, I scoured the con for some Micro Machines in the box to get his signature and was lucky to score a James Bond set that I returned to him for an autograph.

With our panel commitment and sheer desire to search every nook and cranny of the vendor tables, we didn't get to meet some of the other people on hand like voice actor Michael McConnohie, puppeteer Jim Martin, and YouTube stars the Nostalgia Critic and Angry Video Game Nerd. However, Wyatt and I were both grateful to interact with the men who voiced some of our most treasured childhood heroes.

Be sure to check out RD80s' complete coverage of Retro Con 2015!
Newer
Older
Powered by