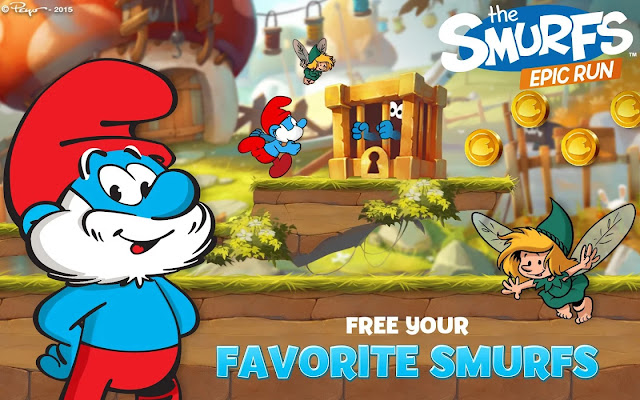 The Smurfs are back and on the run from Gargamel's evil fog spell! Ubisoft presents the new runner game Smurfs Epic Run for phone and tablet platforms. Save your favorite Smurfs as you collect coins, use potions, and stomp enemies through each 2D side-scrolling level.

Before I give my review, check out the game features:


The Smurfs was always one of my favorite Saturday morning cartoons as a kid and I LOVE that they are still around albeit in a different format now. A few years ago, I reviewed Smurfs Village and was one of the inital game apps I played on my first Nexus tablet. It managed to hold my attention for a couple months, but I eventually gave up the Farmville knockoff. The Smurfs are now back and in one of my favorite mobile gaming formats. Smurfs Epic Run is a runner, not endless like Temple Run, but contains levels and objectives to complete as you make your way through the game. There are so many elements in the game (possibly too many) that it's a bit overwhelming when you begin. I like that you can unlock Smurfs and each one has different abilities to help you throughout the game. Plus there are other ways than completing runs to earn those precious coins, energy, and gems like trading in sarsaparilla, achieving Papa Smurf missions, and unlocking chests with golden keys.

I've been playing for a couple days now and it is challenging. The app can be glitchy and if you connect your Facebook account, be prepared to uncheck boxes before and after ever run if you don't want your FB wall covered in Smurf posts. However, if you're fan of the Smurfs and the runner-type games I think you'll enjoy. If you have some gaming friends, you can compete against them in a weekly tournament and also assist each other with daily free energy which is needed for each level.