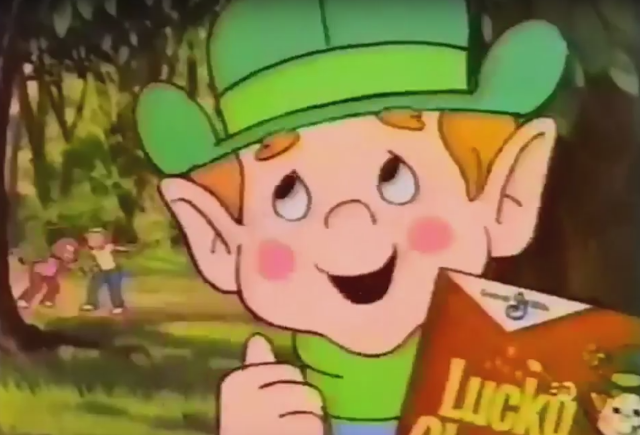 It's time to reflect on our favorite Irish leprechaun mascot Lucky from Lucky Charms cereal. He is perhaps the most beloved marshmallow salesman of all-time and his commercials were always a magical adventure...to escape those thievin' kids! I mean, they knew it was just cheerios with chopped-up circus peanuts, right? (For real.)

But whatever you might have thought of the actual cereal, the commercials were really fun and creative (even that messed-up whale incident.) So here's how it usually went down. The kids would spot Lucky and attempt to cereal-nap his Lucky Charms at any cost. Lucky would use his magic to create some means of transportation to get away. His escape tactic usually backfired and the kids would find a way to get the upper hand and get the Lucky Charms (maybe they should have just asked him politely in the first place!)

Here are Lucky's 13 best escape tactics that kept those kids from stealing his Lucky Charms (for at least 10 seconds):

The only thing Lucky forgot was a few attendants to keep the kids away from the handbrake.

So it's not as cool as a DeLorean, but a rainbow wormhole would still be a fun way to time travel.

Wasn't this the plot of Conan the Destroyer? They really should've taken advantage of Lucky being trapped in ice and gave us Lucky Charms ice cream bars (you know I'm right.)

A Labyrinth of Rainbow Roads

This would've worked great if he hadn't played like the Riddler and gave them a clue.

Swinging Across a Ravine

Sometimes you gotta take a risk like Pitfall Harry to protect your gold (or Lucky Charms.) It's also apparent that Condors are on the extinction list because there eating too much sugar.

A perfect plan that could only be foiled by a...tree-climbing mountain lion?

Good plan but next time you want to be a human Shrinky Dink amongst a pack of mushrooms, give Papa Smurf a heads up first so he can help with hiding you.

Next time shove a few marshmallows in the lamp before the trip.

Maybe he should've used E.T.'s phone to called ahead first.

Forget the Superman III computer plan, just give the kids the pack of Skittles inside the box and they'll leave your bowl of rainbow feces alone.

Like, wow. Nevermind the fact that Lucky almost plummeted to his death, we just want those new purple horseshoes!