What ‘80s Sci-Fi Movies Got Right About 21st Century Tech 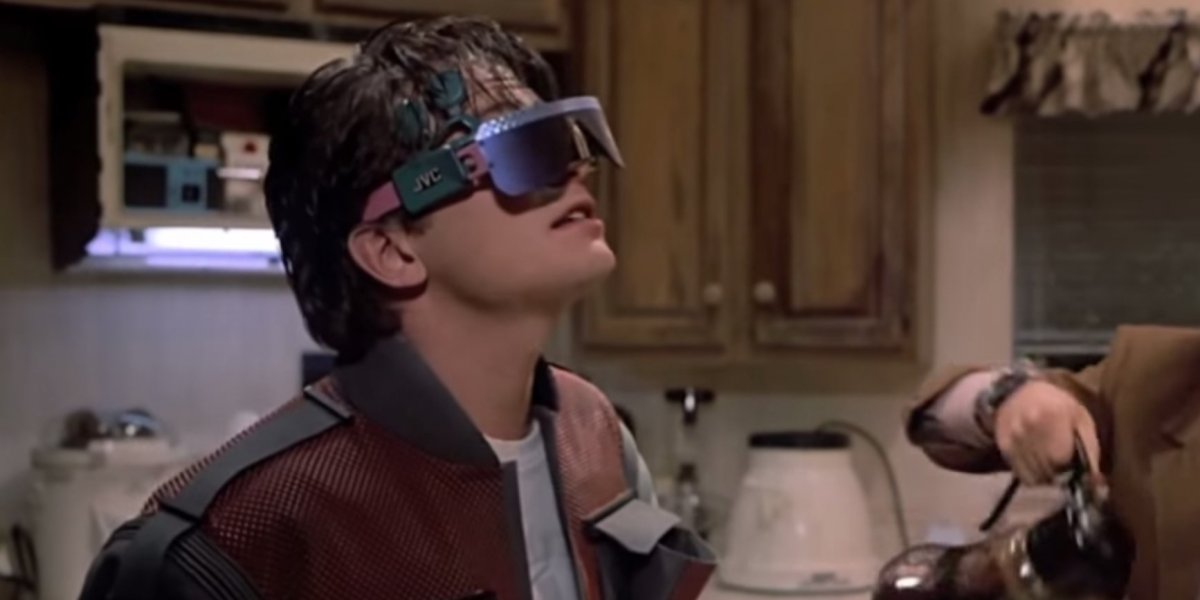 When you think of technology in sci-fi films, what probably comes to mind is spaceships or laser pistols – which are a couple areas where reality has dramatically failed to live up to predictions. But cinema has predicted the future many times, most notably in the 1980s, when today’s technology was close enough to be conceivable yet still far enough away to be exotic.

Let’s embark on a quick sci-fi trip to rediscover several movies from the ‘80s that got today’s tech right – and what exactly they introduced or predicted that essentially became true.

Back to the Future Part II

This 1989 time-traveling sequel didn’t top the box-office charts like its 1985 predecessor, but several of its tech predictions were spot on. Many of them even came true by the October 26, 2015 travel date in the film which was hilariously noted by Doc and Marty last year.

In the film, Doc Brown (Christopher Lloyd) has a tablet that looks very like an iPad which Apple released in 2010. At breakfast with Marty McFly (Michael J. Fox) and family, his kids are wearing multimedia specs that resemble a cross between Google Glass (2014) and the Oculus Rift (justout).

Sadly, the new hoverboards, which have became notorious for battery-related fires, don’t really hover like Marty’s in the movie. They are simply self-balancing platforms with wheels firmly on the ground. Real hoverboards have been tested with propellers or magnetic fields (that even car-maker Lexus has devised) and similar products like the hydro-propelled board from Zapata Racing still pay overt homage to the movie.

No prizes awarded for guessing what year this appeared, but the film does wins extra crystal-ball kudos for all of its technology. George Orwell, author of the original novel, conceived it all in 1948.

Nineteen Eighty-Four’s telescreens contain cameras that monitor everyone, everywhere, indoors and out…sound familiar? There are about six million CCTV cameras in Britain, one for every ten people. And the large, thin displays envisaged for the telescreens by director Michael Radford’s team resemble the modern flat-screen format which wouldn’t actually appear until Silicon Graphics introduced the first in 1998. Nowadays, they are getting thinner than even Orwell or the film-makers could have anticipated. One of LG’s latest flat-panel TVs measures is less than 3mm from front to back.

Also featured in the film is the Speakwrite, a voice-recognition machine that turns spoken word into text. When the movie was made, voice recognition was experimental and could only understand a few words at a very slow pace. But today, we have the likes of Apple's virtual assistant Siri, Microsoft’s Cortana on Windows 10 as well as elaborate and specialized speech recognition software with applications ranging from car systems to health care.

Capitalizing on the rise of hacker culture, WarGames (1983) depicted a teen (Matthew Broderick) who stumbles into a U.S. military computer and mistakes the software controlling nuclear weapons for a game. But what’s often forgotten is that even after Broderick starts the computer on the path to global war, the world is saved by the software’s ability to play actual games and learn from them.

Instructed by Broderick and inventor John Wood to play tic-tac-toe repeatedly, the computer learns it can’t win, and applies that lesson to war. It’s a brilliant demonstration of the power of artificial intelligence (AI) and machine learning which was still a developmental idea in the 1980s. AI powers real-life applications in many fields today including gaming, which has proved to be one of the most spectacular proving grounds for new concepts. Even the simplest of games in this era can involve mind-bogglingly complex choices, perfect for showing off silicon’s capabilities.

Tic-tac-toe (or noughts and crosses if you prefer) was indeed the first game to be conquered by the computer at Cambridge University in the 1950s, but other seemingly straightforward games took a lot longer. AlphaGO, a program developed by the intelligence company, has only just beaten a professional human player at the Chinese board game Go. There are more possible positions in Go than there are atoms in the universe (surprisingly even more than in chess) where IBM’s Deep Blue computer became tech legend by defeating grandmaster Garry Kasparov in 1997.

Card games are under assault from AI now as well. Scientists at the University of Alberta in Canada created Cepheus, a poker bot that solved Limit Texas Hold’em poker by repeatedly playing against itself and learning more with each hand. This news took the online poker world by storm, to the extent that a spoof article published shortly after suggested that the popular online poker room PokerStars immediately moved to acquire the bot in order to train its professional players. Although the online poker community soon realized the satirical nature of the article, the extent to which the poker world was taken by storm by Cepheus was obvious.

With real descendants like these, it’s no surprise that the digital mind in WarGames remains more believable than other AIs in 1980s film, such as the evil Master Control Program from Disney’s computer-animation ground-breaker Tron (1983).

Cloning sheep, growing mice livers and even replacing human limbs with prosthetics would have seemed incredible in 1982, the year of Blade Runner. However, we’re still a long way off producing the genetically-engineered, nearly-human androids known as the Replicants in Ridley Scott’s movie. In fact, today’s robots are probably closer to Number 5, the metallic star of 1986’s sci-fi comedy Short Circuit.

Blade Runner was a box-office disappointment, taking only about $34 million. “People didn’t get it,” said director Scott. “I was way ahead.” But it’s often listed among the best Sci-Fi movies ever which proves the size of the audience doesn't always match a film's greatness.

And Blade Runner did make one very accurate prediction: the rise of the digital billboard. Scott’s vision of Los Angeles in 2019 depicts huge digital advertising displays for brands like Coca-Cola and Pan Am. And though Pan Am is long gone, such screens are becoming commonplace in major cities.

Advertisers would've loved digital billboards in the '80s instead of paying for some of those famous advertising pitchmen. The ability to show moving video rather than posters and now displaying live streams of consumers’ Tweets and social-media posts is now predicted to be the fastest-growing advertising medium until 2020 (and they’ve appeared in more movies since Blade Runner, like Minority Report in 2002).

So the futurologists of 1980s film didn’t get it all wrong. There’s even instant messaging in the 1986 Brat Pack rom-com Pretty in Pink of all places! But 30 years from now, it will be interesting to compare technology of todays’ movies – perhaps the super-realistic AI of Ex Machina or the interplanetary expedition of The Martian? One thing to bank on: filmmakers will get some of it right!