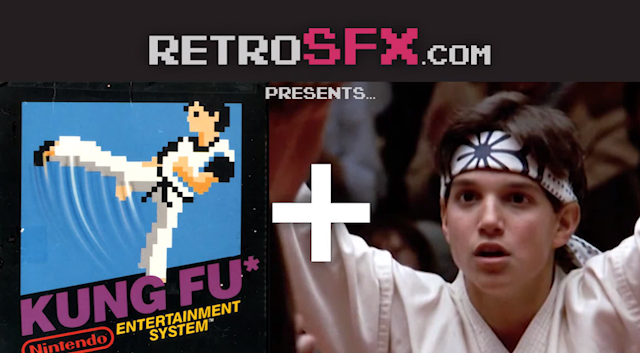 I discovered a marriage of epic retro proportions today when a Facebook friend sent me a video. We just started watching the Summer Olympic games a couple nights ago when Michael Phelps avenged his previous loss to Chad le Clos in the 200M Butterfly. This morning I was tagged to watch the following video which mashed classic Super Mario Brothers sound effects from the water levels with Phelps' race...

Totally rad, right?! The video was created by RetroSFX and after a couple clicks, I found their YouTube channel which is full of movie and sports mashups with classic gaming sound effects. You wanna here what Lord of the Rings sounds like with The Legend of Zelda? Better Off Dead with Paperboy? Maybe the 2016 NBA Finals with Double Dribble? Check out the RetroSFX channel trailer first and I'll share a few of my favorites...

So now that you got a taste of some of there epic mashups, here are a few of my favorites so far. Probably my go-to game when I need an NES fix is Contra. I love the challenge now of trying to beat the game without using the famous Konami code to start with 30 lives. I'm also still impatiently waiting to get my hands on the new NECA Bill and Lance action figures this month. Needless to say, this mashup with Predator seems like a match made in alien-hunting jungle heaven.

Another personal favorite game is Galaga and this mashup with the Star Wars scene aboard the Millenium Falcon is just perfect...


Another game I remember playing alot at the arcade was Kung Fu Master and this mashup with The Karate Kid made me smile...

More mashups on the RetroSFX channel include Aliens/Metroid, Three Amigos/Wild Gunman, Terminator 2/Mega Man 2, and more. Go subscribe to their channel and leave a comment with what mashup they should do next!
Newer
Older