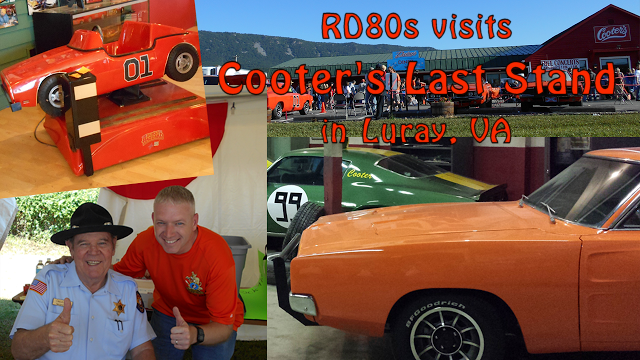 What an experience a Dukes of Hazzard fan, such as myself, had at this two-day event. I was only able to attend the Sunday, July 30th event yet it was such a glorious event that I want to share with our fellow Dukes and Rediscover the '80s fans.

My day began from my humble abode in Laurel, MD and traveling South, through the busy highways of Washington, DC then West towards Luray, VA. Shortly after passing the DC area I came upon an exit sign for Stringfellow Rd. Also being an Airwolf fan, the theme song and the lady's turbo sound effects rang out through my head, drowning out the road noise.

About an hour from my destination, I spotted a modern VW Beetle dubbed as a Herbie replica. It's the subtle things in life that put a smile on one's face especially a person who watched my fair share of Herbie movies. Shortly afterwards, as I navigated the narrow, two-lane roadway along US-211 West I was happily welcomed by a General Lee passing me, perhaps to grab breakfast. Once again, I came upon another General Lee parked at a McDonalds which told me I was at least close by.

About a mile away from Cooter's Place, I suspected that this would be a huge event as there were traffic signs cautioning drivers of an event along with traffic cones guiding thru-traffic and event traffic to their respected routes.

And then ... there I was ... my windshield and eyes happily reflecting orange along the right side with the sea of General Lee replicas along with a few spots of Jeeps, Sheriff cars, tow trucks, and Uncle Jesse's truck, and that was all in the foreground. Luckily, I had to inch my way towards the turn-off so I was able to ingest the size of the field and the events that Crazy C had organized. 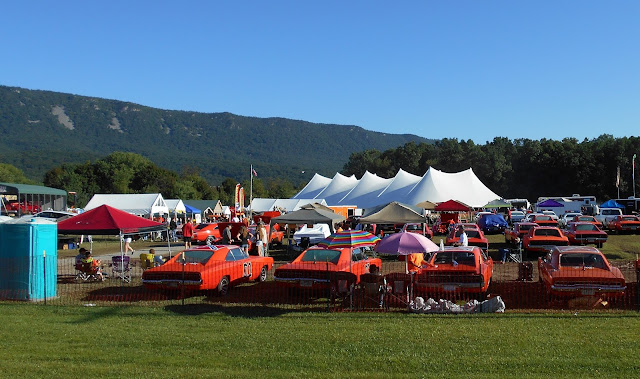 I was ushered into a nearby field to park my Chrysler minivan and as I started into the field, I felt as a Duke boy taking my two wheel-drive car through the bumpy and soft terrain. Walking through the field, I passed by an old, falling down barn which immediately reminded me of the early episodes of the General jump-crashing through them. After paying for my ticket, I entered into the area at 8:50 AM and was immediately welcomed by a multitude of tents. My sights were fixed, however on getting my cast photo autographed by as many of the cast members as possible.

Immediately, I focused in on Catherine Bach / Daisy Duke's booth and began my wait and anticipation to meet the Queen of Hazzard. As I stood, I looked up to see the clear skies and spotted a drone capturing the aerial views of Cooter's Place. Next, I began to scan the area and see what all Mr. Jones had commissioned for his event. Directly behind me was a WWE wrestling ring with a wrestler waiting for his fans and perhaps to have his turn in the ring. Along with the wrestling ring were trailers and tents set up for concessions and merchandise. Behind the ring were two General Lees, one parked on the ramp as if to jump and one behind it (back up stunt car). To the left was a large, inflatable slide and bouncy house for the kids and in the distance I could hear a mean engine running. To my surprise, it was General Hazzard the monster truck carrying passengers in the truck bed as it performed donuts and various mudding fun. Next was a BMX ramp with the riders high atop a trailer, preparing to race down and perform for the crowds. Finally, as I faced myself back towards the booth, I gazed at all of the names of the actors signing and taking pictures for the fans. From right to left, John Schneider (Bo Duke), Don Pedro Colley (Sheriff Little), Sonny Shroyer (Enos Strate), Mrs. Dorothy Best, Tom Wopat (Luke Duke), Rick Hurst (Cletus Hogg), and finally Catherine Bach (Daisy Duke).

The actors were to begin their autograph sessions at 10 AM and I was able to spy Rick Hurst, Tom Wopat, and John Schneider arriving promptly. However, Catherine Bach was detained and did not arrive until 11:20, however seeing that Rick Hurst's line was much shorter and moving, I jumped out of line at 11:00 and waited my turn to see Cletus. Although still a wait, I finally met up with Cletus and gave him a small token of thanks from a fan. I picked up challenge coins, known predominately throughout the military arena, and planned to gift them to the actors and I was able to give one to him. As I explained to him, I thanked him for coming out for the fans and thanked him personally for being a part of the show. He was very intrigued and asked many questions about the coin, where I worked, and such. He is a very engaged person who spends time with the fan and not rushing you off. 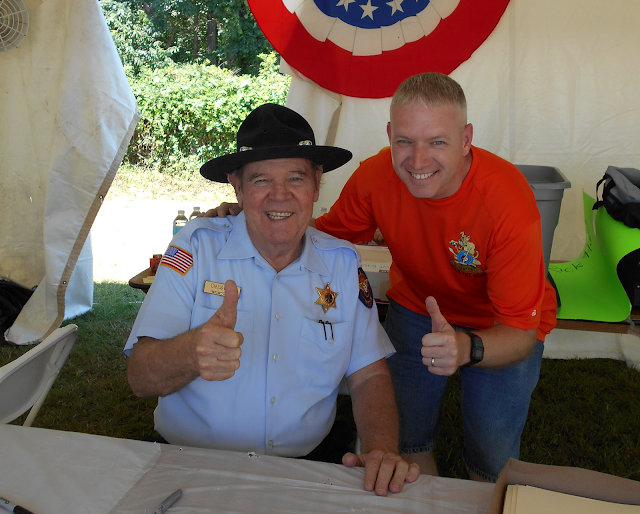 Next, I walked over to Dorothy Best's booth to meet her and to see if she had stories of her beloved husband. Once there, I did get to speak with her and talk about Mr. Best, especially after gifting her with a challenge coin. She asked about my service, still serving after 22 years in the US Air Force, she mentioned that Jimmy was in the Army Air Corp in 1944 and it was during his enlistment that there was an event looking for actors and he tried out and the rest is history. She was also very appreciative of the token and I asked for her autograph which she lovingly placed next to James Best's.

Upon completion of this, the time was about 2:30 PM and I knew my chances to get any other autographs was slim so I began to walk around and capture video of the event and to see what else was around. I traveled up and down the rows of Dukes of Hazzard cars, seeing the many Chargers and a few variations of the General Lee to include blue, black and yellow Chargers. As I mentioned previously, there were other vehicles to include Daisy's Jeeps, Hazzard County and Chickasaw County police cars, a couple Cooter's tow trucks, a couple yellow Road Runners, and a couple Uncle Jesse's trucks.

Afterwards, I decided to checkout Cooter's store and, much like the Nashville store, the customer walks into the general store area. To the right, begins the showcases of the Dukes of Hazzard merchandise of yester-year along with a fireplace and a large television set playing episodes of the Dukes of Hazzard with recliners for patrons to enjoy. Next I spotted the Hazzard County recording studio where one can sing the theme song and have a CD made for their enjoyment, or embarrassment. Shortly after, I saw a mock up bedroom with the Dukes of Hazzard Sheets and curtains as well as the tent and a ride on-General Lee peaking out. Walking through a set of doors, I walked into a mock up of Cooter's Garage with a few car parts and vehicles to include Boss Hogg's Caddy, Cooter's 99 race car, and a General Lee. Walking back through and to the left wing of the building, I walked into Daisy's Store where one can purchase food (although closed for the event), listen to the jukebox, or play an arcade game. Outside Cooter's Store, another round of cars are on display to include the 1984 Cadillac Hearse from the most recent Ghostbusters movie.

Finally, I made my journey to see if I could get an autograph from the event marshall himself, Ben Jones. As I arrived, I discovered that he had fallen the day before and was in some pain with a friend placing an ice pack on his shoulder. Mrs. Alma Jones came over to inform us that he would be signing autographs, however it would not be until after the jump at 6 PM. Ben looked over and with a smile and a wave to his fans, you could see that he wished he could be able to meet us. Shortly afterwords, his friend came to advise that he was not signing until after the jump because of his health, but I asked if I could give him or have the gentlemen pass along the challenge coin for me and offer my thanks. He did so, jotting my name and message on the outer plastic sheath.

Unfortunately, I could not stay much longer as my husbandly and fatherly duties as well as preparing for my next day of work, not to mention the amount of traffic I faced ahead in the Washington DC metro area, took precedence. As I exited the event area and walked back to my car, I captured the prizes of the day and recalled my joyous time on a video. You can check it out on the RD80s YouTube Channel or watch below...

This was an awesome time and I am very privileged to have taken the time to visit Cooter's Last Stand in Luray, VA.
Newer
Older
Powered by