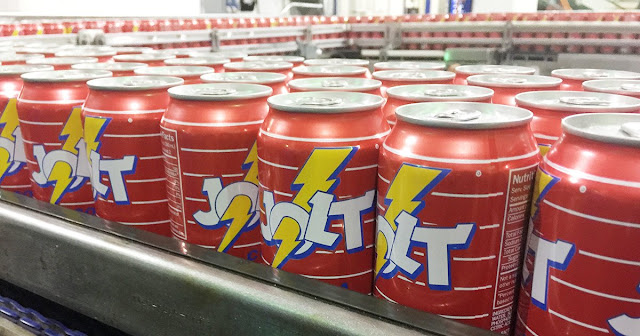 All the sugar and twice the caffeine of Jolt Cola is coming back to a store near you...with it's original style cans! According to a recent press release, Jolt's CEO Doug Dixon has a new spokesperson for the company, Kathryn Lyons, and is pushing for Jolt to "take back its rightful place as the carbonated energy beverage of America.”

Jolt originally launched in 1985 as America’s first carbonated energy drink with a commitment to "all the sugar and twice the caffeine" in every can. Despite the worries of parents and dentists across the country (some dentists actually debunked its cavity potential), Jolt Cola became a staple in the soda aisle of grocery stores. It continued to have a cult following despite some admittedly bad decisions by the company (like the battery cans) that eventually resulted in ceasing production.

Now with successful comebacks of retro drinks like Ecto Cooler, Surge, Zima, and New York Seltzer, Jolt Cola is looking bank on nostalgia and take the market by storm in just a few days! You can purchase single cans of Jolt Cola in it's original can style for $1 exclusively at Dollar General stores beginning Sept 21, 2017.

Are you ready to rediscover the original cola energy drink?