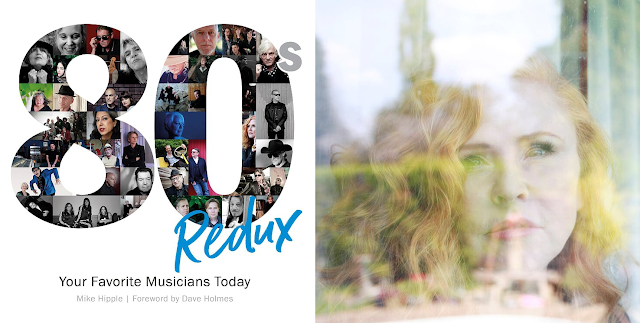 When I think about my favorite actors, music artists, and celebrities that you haven’t seen in awhile, my mind typically goes to those click-bait slideshows that you often find in web searches. You’ll see a nice photo of the person from back in the day and then typically a paparazzi photo of them in some awkward position. I’ve never really given those “Where Are They Now?” articles much weight because I would rather preserve my memories of that person in their heyday. And besides, it’s not like any normal human being would sign off an article that probably shows their best and worst sides.

Well, there’s a new book that does “Where Are They Now?” in the best possible way. Photographer and author Mike Hipple has engaged many influential musicians and performers from the ‘80s in his new book 80s Redux. Instead of contrasting the past and present, he has wonderfully married our memories of great music with a current status update of high quality images and stories.

Here is the official press release and trailer for 80s Redux:

The influence of 80s culture is undeniable, perhaps most popularly in music. So what are the musicians who built the sonic landscape of the 80s up to? Photographer Mike Hipple seeks to answer this and other burning questions in this nostalgic collection of portraits and interviews featuring more than 40 influential performers of the 80s, including Lol Tolhurst from The Cure, Cindy Wilson from The B-52s, Robyn Hitchcock, punk pioneer Alice Bag, and Kristin Hersh from Throwing Muses. Join Hipple on this fan's journey to three countries and all four corners of the US to get an intimate look at these hit makers' stories. Some are still releasing critically-acclaimed records and touring, some could be the rock star that lives next door, and at least one is living a bohemian lifestyle in a 100-year-old farmhouse. Complete with a deft foreword by television personality and Esquire's L.A.-based editor-at-large Dave Holmes, this is the perfect book for fans of the eighties.


REVIEW: I’m very grateful to have received a review copy of 80s Redux. My knowledge and experience with ‘80s music is mostly centered around Top 40. I sadly haven’t gone very deep with most of the alternative and punk bands from the early ‘80s. However, I have delved more into new wave artists so it was good to still see many familiar faces in the book like Men Without Hats, OMD, Animotion, Modern English, and more.

Personally, 80s Redux was more of a history lesson in early '80s influential music than what many would see as “catching up” with these groundbreaking performers and bands. What I enjoyed most about the book wasn’t really the interviews themselves but author Hipple’s personal stories. The interactions aren’t the typical back-and-forth format so hearing his experiences mixed in with quotes from the artists made it a fun read. And like I mentioned before, the photography is professional quality and beautifully showcases each interviewee at their stage in life now.

While the photography really stands out, 80s Redux is much more than your typical coffee table book. If you were (and still are) an ‘80s music nerd that refused to be satisfied with just pop music, than you will really enjoy 80s Redux. For those of us who were kids in the early '80s and didn't develop our musical taste until later in the decade, there are still artists you'll love reconnecting with like T'Pau and Johnny Hates Jazz.

Pick up a copy now from independent book stores like 3rd Place Books and Powells, or also on Amazon.