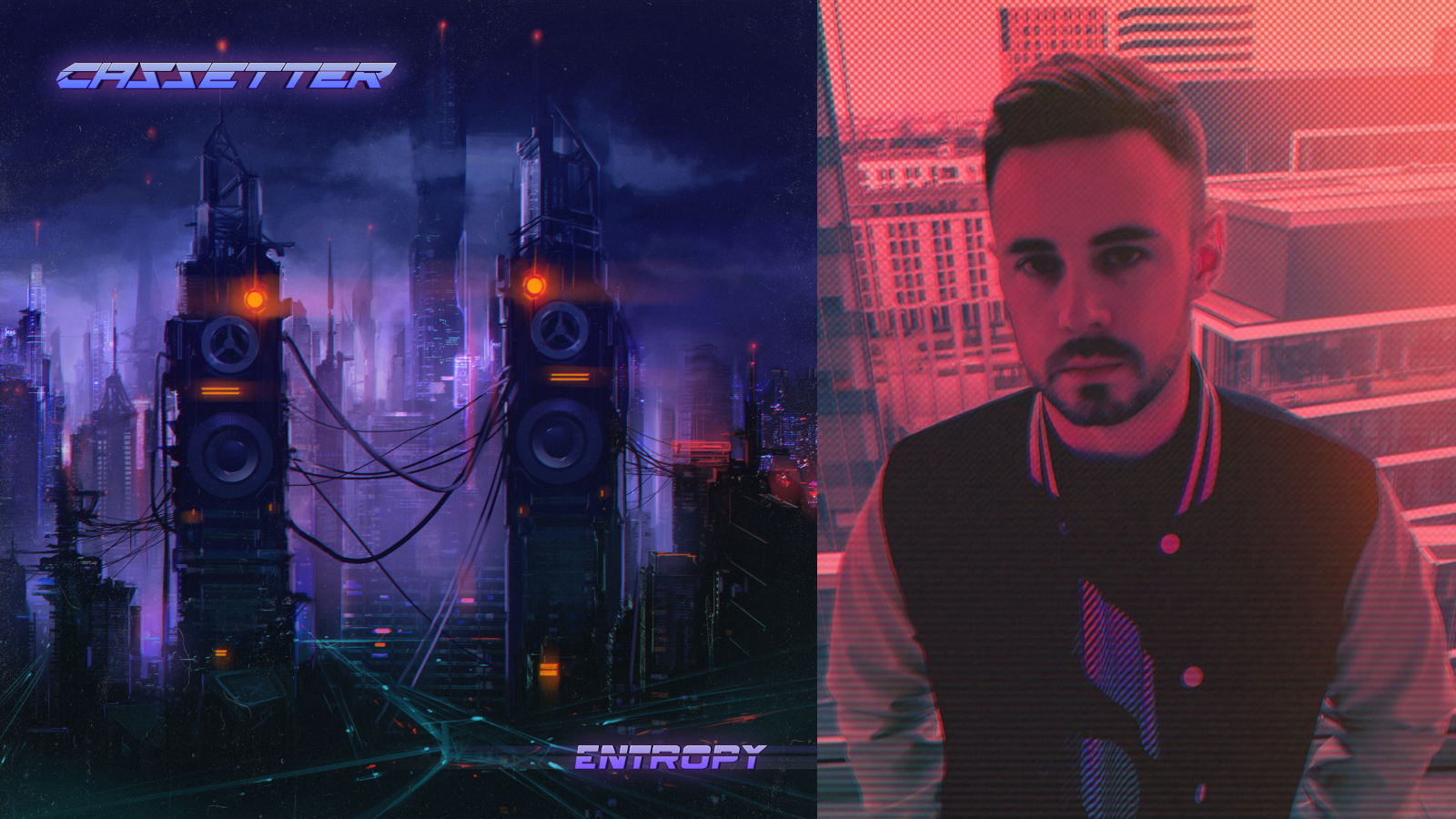 It has been awhile since I've posted an album review and Cassetter's sophomore album Entropy released by FiXT Neon made the perfect gateway for getting myself back in rhythm. Entropy is a roller coaster of synthwave vibes that will keep your hands raised until the ride comes to a stop.

The first single "500th Floor Terrace" is everything you would expect from a solid synthwave track, driving and electronic. The lead track on the album "Catch Me If You Can" feels straight out of GTA Vice City with a highway chase vibe. Entropy also takes you to darker places with the tracks "High Rises", "Memory Manipulation", and the final track "The Haunted Train."

While most tracks are instrumental, several feature vocals and these are actually my favorites on the album. "Nexus" featuring Mari Kattman is perfectly mixed and the vocals really compliment the glorious synth work. "Back to 2080" with King Protea has a real laid-back groove with soothing yet ranging vocals which makes for a great ear candy.

I'd highly recommend Entropy as a solid listening experience for any synthwave fan. Stream the album below for yourself and also visit the fanlink to connect with your favorite music app.

The time has come: Cassetter’s second full-length album 'Entropy' is now available for pre-order along with the instant-grat single "500th Floor Terrace"! 'Entropy' takes traditional synthwave music and turns it on its head with creations that swing from upbeat, pop-flavored tracks to experimental cyberpunk music with a gritty dark side. The recording builds on the artist’s excellent debut with more diverse songwriting, stronger production chops, and new vocalists across 14 stunning synthwave tracks.

Combining the melodic nostalgia of old school synthwave with modern production chops and a variety of outside genre influences, Cassetter creates cyberpunk music that is simultaneously a throwback to the past and a cutting-edge vision of what’s next. The artist crafts every bit of his retro-futuristic soundscapes from the ground up for an unmistakable sound, and his subtly dark world invites listeners to come in and go exploring.

Cassetter released his first full-length album, The Fugitive, in 2019. The recording established him as a forward-thinking creator able to forge a unique sonic identity without cutting ties to synthwave’s roots, and the result attracted a wide audience, leading to tens of thousands of streams between Spotify and YouTube within weeks of the album’s release. In addition to his growing fanbase, Cassetter caught the attention of independent synthwave label FiXT Neon, which signed the artist to a deal in late 2019.

Kicking off with a full re-release of The Fugitive along with a collection of the creator’s early tracks, Cassetter has embarked on the next era of his career with his brand new album Entropy.

FiXT Neon is an artist-owned, independent record label covering creations across a full spectrum of retro synth music, including synthwave, indie pop, cyberpunk, and more. Like the original FiXT label, FiXT Neon was born from a commitment to providing artists with creative liberty and fair compensation, cultivating inspired creations and ensuring fans receive more music from the artists they love.

By taking a visionary stance toward synthwave and its related genres, FiXT Neon has cultivated a roster of ambitious and innovative artists who are redefining the next generation of retro synth music. Although the label embraces a diverse selection of styles, from rock-flavored tracks to atmospheric cyberpunk and sunny popwave, its artists all have one thing in common: they all make great music. FiXT Neon provides an outlet for unique, personal creations that will resonate with synthwave fans of all types.

FiXT Neon provides a launching pad for the most talented and forward-thinking synthwave artists of the new era. Starting with a core group of big-name creators including Scandroid, PYLOT, The Bad Dreamers, LeBrock, Mega Drive, and others, the label has quickly made an impact on the synthwave world and has become the key destination for top-tier releases from artists on the cutting edge of the genre.