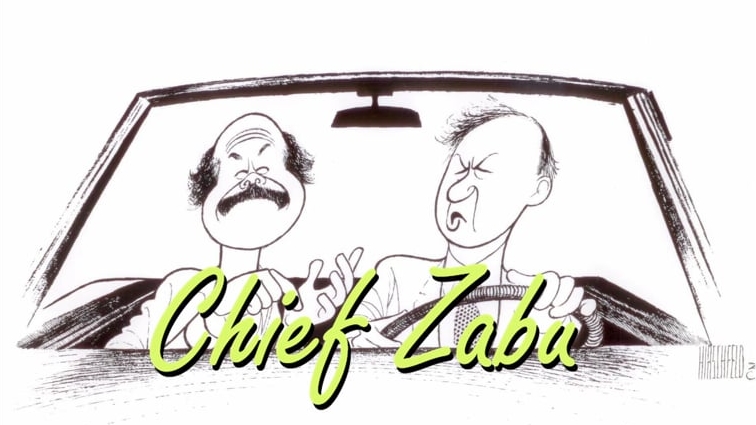 The indie film Chief Zabu was set in the heyday of 1980s Manhattan and actually shot in 1986
but never released. The socio-political comedy was inspired in part by a real estate mogul named
Donald Trump, who in mid '80s New York City already had earned a reputation for an
outsized ego and political designs.
Decades after it was shot, Chief Zabu is now available to rent or purchase on Amazon, Google Play, Apple iTunes and VUDU. Watch the official trailer then check out my review...

While there are mainstream movies from the '80s that I have yet to see, it was fun to watch a movie in its long lost glory. Chief Zabu has its moments like the scene with Ben and Sammy riding in the car (depicted in the headline image.) The squabbling of percentages back-and-forth in the deal they are trying to make was a real laugh out loud moment. If it was scripted, then they deserve a standing ovation. The characters are very relatable in their ambitions for their careers and wealth. Trying to get ahead in life is something we all want and Chief Zabu stretches the lengths at we will go to live in comfort.
It's easy to see where the film is going but the bumpy ride to get there is what makes Chief Zabu worth the watch. Personally, I'd recommend renting it if resonates with you as the recurring joke on Mystery Science Theater 3000 or if you like quirky "cult classic" type films. It's not one I'll be adding to my collection but I did enjoy the acting and the glimpse into the '80s culture.

From the press release:

The long, circuitous route of the film begins well before 1986 when creative hyphenates Zack
Norman (comic, writer, director, producer, actor) and Neil Cohen (writer, director, producer,
illustrator) wrote a screenplay after Zack attended a meeting for private investors hosted by
the political leadership of a newly constituted nation applying for United Nations membership.
“Every hustler and huckster in New York at the time was at this meeting,” recalls Zack, “not to
mention Hollywood celebrities like Warren Beatty and Elizabeth Taylor. Afterward, when Zack
told Neil all about it, Neil said, “I think we have an idea here for a script.”
Indeed, the plot of the film – written, directed and produced by Neil and Zack – follows an
ambitious New York realtor who dreams of political power and decides to accomplish this by
taking over a nation. As Neil remembers, there wasn’t a personality more emblematic of the
financial excesses of the era than Donald Trump.
“Trump already had begun slapping his name all over buildings in Manhattan,” says Neil. “He
was transparently self-promotional and egomaniacal, which made him ripe for parody and the
inspiration for our lead character, the status-seeking real estate developer Ben Sydney, played
brilliantly in the movie by the late, great Allen Garfield,” Garfield, 80, died on April 7 from
COVID-19; ironically, it was the very same day that Zack and Neil finished their final cut of the
film.
For Zack, the connection to the man who would become the 45th U.S. President was even more
bizarre as Zack had been introduced to the woman who became his wife by none other than
Blaine Trump, who was married to Robert Trump who was the younger brother of Donald
Trump (at the time, Zack was already a successful film producer, real estate developer, and
Hollywood actor with credits in Ragtime (1981) and Romancing The Stone (1984).
Made in 15 days on a budget of less than $200,000, Chief Zabu was poised for its big screen
debut in the fall of 1987. In fact, no less than Life magazine had published a double-page spread on the making of the movie as illustrative of the city’s growing indie film industry. However,
one week before its release date, the distributor filed for bankruptcy, cancelling all distribution
plans. Legal machinations consumed several more years, and eventually Neil and Zack had
moved on separately to many other projects.
Still, the promise of the film was kept alive by a classified advertisement that appeared
every week in Variety for years, proclaiming “Zack Norman as Sammy in Chief Zabu, ” a
reference to Zack’s role in the film. He had taken out the ad as a lark, however, it developed
its own cult following as it became a recurring signature joke on Mystery Science Theater 3000,
the long-running series known for its Hollywood send-ups.
In addition to Garfield and Zack, the film stars Allan Arbus (MASH), Marianna Hill (The
Godfather: Part 2), Manu Tupuo (Hawaii), Ed Lauter (The Longest Yard) and Shirley Stoler
(Seven Beauties).
Also check out this interview with writers/directors/producers Cohen and Norman on Paltrocast.
Newer
Older