Science-Fiction & Fantasy is a very broad genre. Any type of story can be contained within either categorization. If you looking for a romance story between two people struggling to build a relationship and throw a dragon into the mix, then BAM...Fantasy. If you want a coming of age story featuring some friends going on a road trip, but traveling in outer space, then VOILA...Science fiction. There are many ways to combine science fiction and fantasy just like the way slots have been mashed with online casinos like Slots Play Casinos.

But let's talk about a specific combination. The Young Adult Military Novel set in space by Orson Scott Card titled Ender's Game. This 1985 novel is a classic must-read for anyone with an interest in science fiction. Let's take a deeper look on the story and how the novel still holds up today.

Ender's Game follows the young Ender Wiggin, an extra-ordinarily intelligent boy with an aptitude toward tactics and strategy. Now, when I say "smart", you might be thinking of other "smart" Young Adult protagonists. The ones that are along the lines of Artemis Foul, where their most impressive feats of intellect are more often told about rather than actually done by the character. This is not Ender Wiggin. 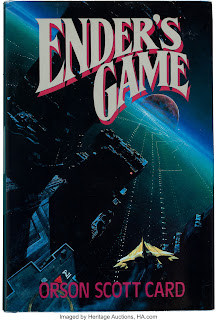 But let’s back up for a moment.

Ender Wiggin is already an outsider even before the story starts. Due to overpopulation, there is an immense stigma against families with three or more children, and a particular stigma against the children born as "thirds". Ender is a third, the youngest of his two other siblings; his sister Valentine and his brother Peter. Peter has psychopathic tendencies and abuses his younger brother.

It doesn't help Ender's situation when a group of bullies comes after him, and we get to see just who Ender really is. Ender works with the philosophy that he never wants to fight the same fight more than once. If he chooses to fight, then he wants to win so absolutely that whomever he’s fighting will never want to fight him again. This philosophy results in his bully’s death. Unintentionally.

The death is covered up and kept hidden from Ender because the International Fleet (or IF) wants to recruit Ender and children like him to train as future generals for war. War against whom, you might ask? Against a bug-like alien species called the "Formics" that attacked humanity twice. In preparation for a possible third invasion, the International Fleet is recruiting new, potential young minds and training them in tactics and military strategy. Just in case. And they want Ender, and badly.

When it comes to warfare, this isn’t Percy Jackson. It’s not about a group of charismatic and handsome teenagers galivanting around killing monsters and saving the world. They’re being trained as soldiers, with the expectation of behaving with the discipline and responsibility that comes with such a job, not to mention all the political maneuvering and chest-pounding that comes in all hierarchical institutions.

The impression you get immediately as you begin to explore the lives of these genius kids, being trained under cold, calculating, military men, is that everyone is manipulating everyone else. In fact, it’s almost explicitly stated.

The adults are manipulating the kids. The kids are manipulating each other. The ones who come out on top start manipulating the adults. The whole book is about power-plays and grand strategy, the building of loyalty in an institution where backstabbing is encouraged, and the thrilling reveals of subtle plays paying off in the long term. By the time everything wraps up, you’re left to wonder, “Who really won?”

Ender and his siblings all come across as cold and manipulating and have been so manipulated through-out their lives that they're paranoid. They see the world as a constant game of power-moves, secrecy, and hidden subtext. When someone's not being manipulative, it's because someone else is manipulating them. However, as someone paranoid once said, “It’s only paranoia if the danger isn’t real”.

That's not to say that story is perfect. At times, there's an almost comical level of intrigue from all the different characters at play. It sometimes feels like a big "You know that I know that you know..." joke. While you're in the meat of the story, this won't be very noticeable, but if you take a step back from the book and the rest of the series, the sheer quantity of side characters playing each other is almost funny. But that's neither here nor there.

The more amusing aspect of the story is Ender's siblings. No, not their sociopathic tendencies, but to keep them relevant, the two characters start hatching a plan to take over the world. How? By writing internet blogs about political events.

The hilarious part is not that they do this, but the fact that they’re somehow so goddam eloquent, they actually start manipulating world events in their favor. Like… elections and stuff. Now, in this day and age, we worry a lot about how social media is affecting politics, but I find it laughable that teenage genius bloggers somehow start affecting global perceptions on major issues. I think Orson Scott Card was thinking (or perhaps optimistically hoping) that the advent of the internet would lead to more intellectual discussion.

Please refrain from guffawing too much. He did write this in the 80s, after all.

Other than that, there are various parts that are sprinkled with Mr. Card's own worldview (he's a conservative and a Mormon). I never found that particularly bothersome, or really even noticed it all that much, but I've seen certain reviewers get really, really, triggered about it. If that’s the sort of thing that get’s on your nerves, then none of Card’s works are probably going to be all that appealing to you.

So all in all, Ender's Game holds up today as a really strong piece of science fiction. It's more realistic than Star Wars, just as philosophical as Star Trek, as approachable as a story to nearly all ages. The Formics are a dark, nebulous threat that is always there but never forgotten about. Ender is a unique Young Adult protagonist, as neither Ender nor the readers are treated have their hands held throughout the story.

The movie adaptation doesn't really do this book justice. It's not bad, it's just that this book is a lot more philosophical and thought-provoking than was brought across by its adaptation. Ender's Game is a very deep book that tackles a lot of hard questions that most Young Adult novels wouldn't touch with a ten-foot pole. In fact, it's so good at what it does, various real militarizes have it listed as suggested reading, including the United States Marine Corp.

Anyway, it's a good book. Go read it. It's worth your time, even if you're worldview is the polar opposite of Cards. If nothing else, it's worth sticking around for the jaw-dropping ending. It avoids a lot of the tropes that you find in Young Adult novels, that stick to it like the plague. No forced romance or love triangles, no tired Hero's Journey, or prophecies. It's smart. It's thought-provoking. It's serious.

9.5 / 10: Ender’s Game is some of the best science fiction book ever written. Hand’s down.