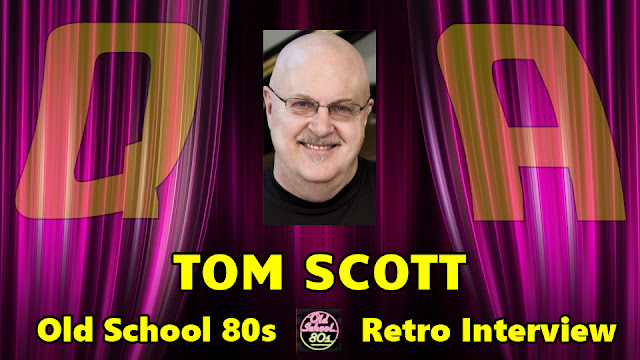 (This interview was originally published October 18, 2013 on the now-retired Kickin' it Old School blog. It is one installment in an incredible series of interviews we are republishing on Rediscover the '80s for posterity and your enjoyment. These are more than just interviews in a way; they are more like '80s timelines or oral histories on their respective subject matters. Please keep in mind the original date because some content could be specific to the time of the interview, though the majority should be timeless and totally rad.) 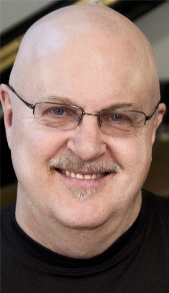 This time that awesomeness is Tom Scott. He is a saxophonist, composer, conductor, bandleader, producer and musical director among other things. Of special interest to '80s fans, he co-wrote “Without Us“, the theme song for the television series Family Ties, and scored several films as well. In addition to his own solo work, he has appeared as a guest artist on more than 500 recordings including a couple of '80s hits. He has received 13 Grammy nominations and has won three of them. Find out more about creating the theme song for one of the most beloved sitcoms of the decade, some of his other '80s work and some of the incredible things he has been doing since then as we get on to some selections from my interview with Tom Scott… 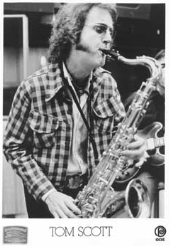 In the '70s, following in his father’s footsteps (Nathan Scott, a prolific composer for television and film himself), Tom Scott wrote the TV theme song, “Gotcha!” for Starsky and Hutch and worked on background scores for several other shows including The Streets of San Francisco. Then in the early '80s, he co-wrote the memorable theme song to what ended up being one of my favorite television sitcoms of all time.

Q: You co-wrote “Without Us”, the theme song to Family Ties. How did you end up working on this particular project? Jeff Barry is credited as co-writer, what did each of you bring to the project? Did you write the song specifically for the show? What is the back story about how “Without Us” was conceived and written?

Tom: I got a call from Al Bart (my film & TV composing agent at the time) to meet with Gary David Goldberg, creator of Family Ties (he just passed away last June) to discuss the theme. Gary chose producer-songwriter Jeff Barry to partner with me as the lyricist. We decided that the song should have an upbeat feel and took a couple of days apart to mess around with ideas. After that, Jeff called with an announcement that he had basically written the hook of the song and it was called “What Would We Do Without Us?” He sang his melody for me and I told him I thought the idea needed some refinement. After some experimentation at home, I added the word “baby” to the middle, which broke up the phrase nicely, I thought. “What Would We Do… Ba-by… With-out Us?”

I called Jeff and he agreed with my addition so we immediately made plans to meet and compose the rest of the song. In that one meeting, we came up with the verse and ending, totaling the one minute we needed. The show debuted in 1982, but didn’t become a big hit until 1984, when it was slotted after the debuting The Cosby Show. That, combined with Michael J. Fox’s success in Back To The Future, launched us into the top five television shows for three years running.

Family Ties ran for seven seasons and 180 episodes from 1982 until 1989. I had the honor of an interview with the late Gary David Goldberg who was the creator of the sitcom. After the first ten episodes, the theme song was performed by Johnny Mathis and Deniece Williams. Here is the opening for Family Ties featuring the theme song “Without Us”…

Q: Why were Johnny Mathis and Deniece Williams brought in to sing the theme song later (after the first 10 episodes) and did you originally write the song with any particular artist in mind to perform it?

Tom: The original duet singers (chosen by Jeff and me) were Jeff’s friend, singer/actress Mindi Sterling and, my pal, former Buckinghams (“Kind Of A Drag”) lead singer Dennis Tufano. Once the show appeared to be a bona fide hit, Jeff Barry sold Columbia Records on the idea of having two of their biggest artists perform the song. Show creator Gary Goldberg liked the idea since it gave his show extra “oomph”. So, Jeff and I extended the song to three minutes or so, adding a bridge and interlude section, and recorded it. That version remained for the duration of the series. Frankly, I preferred the original version – no offense to Johnny & Deniece.

Q: Did you have any feeling that “Without Us” was going to be something special when you wrote or recorded it? What feedback, if any, did you get from the network/producers? 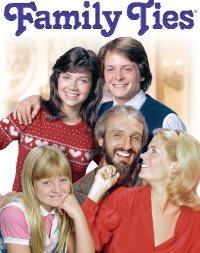 Tom: The “something special” about this tune is its successful run on TV. You never know about something like that when you’re composing a song. Personally, I want all my tunes to be special, but let’s face it, weekly exposure on national television helps a lot. All that aside, thanks for the compliment! The producers said almost nothing that I recall, but I didn’t take it personally. No news is often good news.

Q: What are your sentiments regarding “Without Us” and the Family Ties television series now over 30 years later?

Tom: Because the show was based on an '80s premise (liberal parents with conservative children), I doubt the show will have the more universal staying power of an I Love Lucy for example, however, the writers and actors were all topnotch – and from that standpoint, I’m proud to have been associated with it.

Q: You played sax on some '80s hits including “Rapture” by Blondie (1980) and “Saving All My Love for You” by Whitney Houston (1985). Any details or memories you can share with us about either of those particular songs? 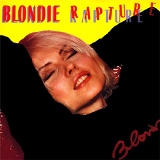 Tom: Blondie’s producer, Michael Chapman, called me one day and requested a session that night – it was for “Rapture”. He played the song for me and then asked me to “fill in these holes”. The saxophones you hear are all me – comprised of four tenor sax tracks blended together. I met Debbie Harry that night. She was very nice to me… and I thought she was hot! 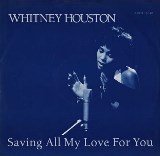 “Saving All My Love for You” was recorded with producer/songwriter Michael Masser at the controls. Whitney did not attend the session personally. However, she did something I have never forgotten – three months later, as the album was being released, she took the time to call and thank me for my performance. Very classy! 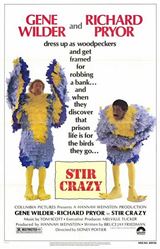 Tom: Each movie has its own set of parameters, but one thing is constant – your job as the film composer is to help the director realize his/her vision. The director is “The Boss” and the goal is to make him or her (and hopefully the studio) happy. It was a particular honor to work with Sidney Poitier, who directed Stir Crazy and Hanky Panky. In both cases, Sidney gave me the freedom to write what I felt. He heard those scores for the first time as we were recording them in the studio with an orchestra. How nice it is to have someone trust you that much! 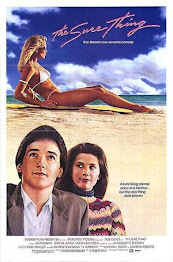 The Sure Thing was directed by Rob Reiner. What I remember most about Rob is that he used to raise his voice for no particular reason. You know, where you want to interrupt him and ask, “Why are you yelling?” Lisa Gottlieb directed Just One of the Guys. There was a lot of “needle-drop” music -meaning rock/pop records were used much of the time instead of underscore. (It occurs to me that needles probably have never been “dropped” by most anyone under 30!) Soul Man was directed by Steve Miner. He became a close friend afterwards and it was a pleasure working with him.

Q: I read that Tom “Triple Scale” Scott was a founding member of The Blues Brothers band, but left in 1980 prior to the movie being made. What can you tell us about those early years working with Belushi, Aykroyd and all of those other brilliant musicians? 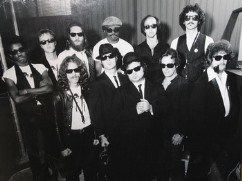 Tom: I wasn’t exactly a founding member – more accurately an “added” member. The first official Blues Brothers gig was as opening act for Steve Martin at the Universal Amphitheater in Los Angeles for a week. I was not a member at the time, but I got a call from Tom Malone (currently in the Letterman Band). Tom asked me if I could substitute for him in the horn section of the Blues Brothers band until his wife delivered their baby in New York. I said sure, so I filled in for “Bones” Malone until Thursday of that week. However, I had apparently impressed John Belushi – instead of thanking me and sending me on my way, “Uncle Johnny” asked me to join the band as a regular! “We’ll just have four horns instead of three!” He could be a really great guy – not to mention funny!

Tom: The '80s represent the last era dominated by real bands with real musicians playing real music. Once the techno era took hold in the '90s (along with the Sampler and Pro Tools), the process of music making changed forever. Not in a bad way, necessarily – just different.

Q: Please tell us a little about where your incredible music career has taken you since the '80s. What are some of your proudest professional accomplishments? 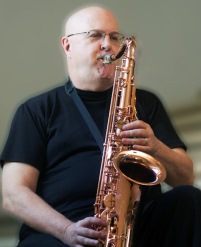 Tom: Well, in the 23 years since the 80s ended, I was a bandleader on two short-lived talk shows (The Pat Sajak Show and The Chevy Chase Show), musical director for the Oscars [1996], Comic Relief, the Emmys a dozen times, recorded ten solo CD’s and received my 13th Grammy nomination. I’ve also been active as a clinician/performer throughout the U.S. and Canada, performing and teaching Master Classes in Woodwinds, Arranging & Film Composing.

Q: If that’s not enough, what else is Tom Scott up to nowadays? Musically and otherwise?

Tom: My latest recording project features 24-year-old Hawaiian ukulele whiz Brittni Paiva. I’ve produced and engineered all the tracks for Brittni’s new CD, Tell U What which also features Micheal McDonald, Arturo Sandoval, Chuck Findley and Ray Parker, Jr. You can find out more at her BrittniPaiva.com website. At the 2013 Na Hoku Hanohano Awards from the Hawaii Academy of Recording Arts in Oahu (the Hawaiian Grammys) it received two awards, “2013 Best Ukulele Album Of The Year” (the first female ever to win that category) and “2013 Best Instrumental Composition” (“Tell U What”).

I am so honored that Tom was able to take some time to answer some questions so I could share them with you here. To find out more about him and keep up with Tom, please visit his official TomScottMusic.com website. I want to take this occasion to again thank Tom Scott for his contributions to '80s pop culture especially through the theme song to Family Ties as well as his film scores and, even more, for going back to the '80s with us here for a little while as well.