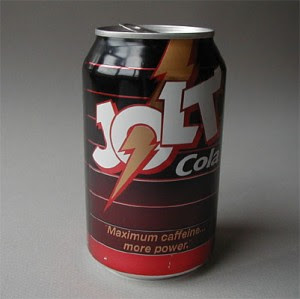 "All the Sugar and Twice the Caffeine."

Yes, that was the initial slogan for Jolt Cola when it hit the grocery and convenient stores in 1985. When I was growing up, this stuff was more forbidden than beer. It had parents pushing their grocery carts about 5 MPH faster down the soda and snack aisle. The only time I drank them was when me and my friends rode our bikes to town to go to the candy store. In my opinion, they were almost too sweet to drink...almost.

By the time I reached high school in 1990, Jolt cola had become more of a fad. There was the occasional time when a friend would bring a couple cans to school to drink before a basketball game. We used poke fun at him, but Jolt matched his personality and his reckless abandonment on the court for 5 minutes and 5 fouls.

In 2005, Jolt reestablished itself with a new "battery" looking can and more flavors. The new look didn't help the financial state of its manufacturer Jolt Co Inc though, and in 2009 the company filed for bankruptcy. But thanks to the energy drink surge in the past few years, Jolt Cola survived and changed its name to Jolt Energy:

For more caffeine and sugar nostalgic feelings, I invite you to watch the Jolt Cola segment on VH1's I Love The 80s.
Newer
Older
Powered by