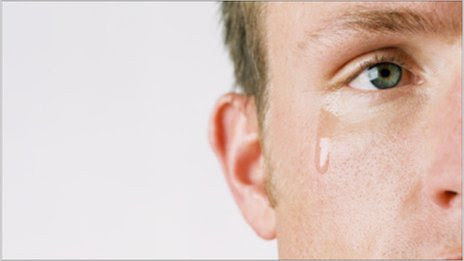 We've all learned that music can be a great healer and get you through the worst of times. Music can also trigger a memory of a very happy time in the past. Add in, those songs that are forever linked to an emotional part of a movie and you can turn even the toughest man into jello. Most of us men are taught to be strong and that crying shows weakness, but we are human after all. So, here is the Ultimate 80s Real Men Don't Cry Playlist that has us men reaching for our handkerchiefs and sometimes, a place to hide.

Journey "Open Arms" (1981)
One of the most powerful love ballads of all time. Steve Perry wails...end of story. 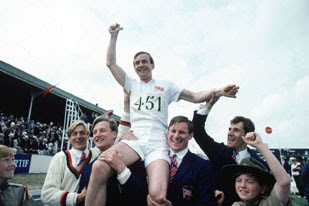 Vangelis - "Titles (Chariots Of Fire theme)" (1981)
Even though it's has been heavily parodied for the running scenes at the beginning of Chariots of Fire, this song still touches the hearts of those who know the triumphant story of the 1924 Olympics.

Billy Vera & the Beaters "At This Moment" (1981/1986)
Originally recorded in 1981, the song got new life on the hit TV show Family Ties in 1986 and was re-released. Michael J. Fox has stated that "Tracy and I couldn't get on the dance floor anywhere in the world for like ten years without hearing 'What would you think...'"

Lionel Richie - "Hello" (1984)
Even though this song has almost a soap opera feel to it, the lyrics really brings home a true feeling of desperation.

Foreigner - "I Wanna Know What Love Is" (1984)
From the 80s "Windshield Serenade Collection" as I like to call it. Is there a man in America that hasn't cranked this song up in his car and wailed the lyrics at the top of his lungs?

Mr. Mister - "Broken Wings" (1985)
We've all been knocked down and Mr Mister will always there to pick us back up.

Paul Young "Every Time You Go Away"(1985)
This song was written by Daryl Hall and was released on Hall & Oates' Voices album. Also appears at the end of the movie Planes, Trains, and Automobiles in 1987 when Steve Martin's character finally arrives home.

Billy Joel - "This Is The Time" (1986)
The popular choice for proms and graduations everywhere in the late 80s and even into the 90s.

Another song that's forever tied to movie moment. John Cusack's boombox serenade in the 1989 film Say Anything gave us guys an easier way to win a girl's heart. Instead of having to try and find the right words say, we can just let the music do the talking for us.

Peter Cetera "Glory of Love" (1986)
From the Karate Kid 2 soundtrack, this song just seems to explain what us guys feel when we stand up for our gals.

Cheap Trick "The Flame" (1988)
Powerful lyrics from this #1 ballad of what it's like to be deeply connected to another person.

Richard Marx "Right Here Waiting" (1989)
Marx really knows how to make it hard for a guy to get through a slow dance without reaching for the handkerchief.

Bette Midler "Wind Beneath My Wings" (1989)
This song was the "My Heart Will Go On" of the late 80s. It was actually recorded by 4 other artists before the famous Bette Midler version on the Beaches soundtrack.

Mike and the Mechanics "The Living Years" (1989)
Written by Mike Rutherford and B.A. Robertson, this incredibly emotional song tells about Robertson's experiences after losing his father and before the birth of his own son.

This might be the quintessential song for going back through old yearbooks and reminiscing about high school sweethearts.
Newer
Older