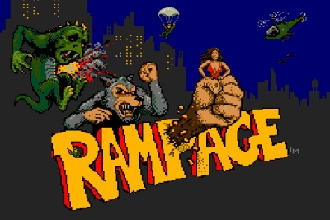 George, Lizzie, and Ralph are unleashed and headed for your town!!

I absolutely loved watching the old Japanese Godzilla movies as a kid growing up in the 80s. I also had a fascination with King Kong, mainly from the 1976 film. So it was love at first site when I saw Rampage in the 80s arcade. Climbing buildings, smashing cars, leveling skyscrapers, eating people...it was like being in a King Kong or Godzilla movie!
And with the ability to have up to three players join the game, it made a great game to play with friends. Rampage's history is not one that involves many arcade sequels, but it's concept and simplistic gameplay has stood the test of time, to the point of a rumored film adaptation. Let's rediscover those creatures that came from Scumlab laboratories and relive the mayhem that North America and the world has suffered over the past 26 years.

Bally Midway released Rampage in 1986. The game story consisted of three characters that had mutated into large creatures. Who new that eating some mega vitamins, taking a dip in a radioactive lake, or eating some bad food could turn you into a monster? But that's what happened to these ordinary people. Experimenting on them at the Scumlabs facilities did not help and when they escaped, it was time for some payback. The objective was to destroy any and all buildings, vehicles, and people in your path. Varies elements within the game could help regain your health, like eating people and food found in buildings. There was also one human that each character could hold for awhile, increasing your score. If your your health was totally lost, your character would transform back into a naked human and carefully walk off screen. Rampage was a hit among arcades, even with the hundreds of levels to conquer. (I'm sure there is someone who has beaten them all, but I've never known anyone to come close.) After the arcade release, Rampage transitioned to home consoles, like Commodore 64, NES, and Atari 2600. Some were better than others, but the main complaint for the NES version was that it omitted Ralph the werewolf. Over a decade later in 1997 came the first and only arcade sequel, Rampage World Tour. It was very similar to the premise of the original with a few new features and updated graphics. Also instead of just destroying cities in North America, the creatures circled the globe (and even the moon for the final stage) looking for destruction. Some cabinet machines featured wider 3-player friendly controls. Rampage World Tour was also made available on platforms like N64, Windows, and Gameboy.

In the past decade or so, Rampage has had many sequels released for home consoles. Rampage 2: Universal Tour released in 1999, features 3 new monsters in Curtis (rat), Boris (rhinoceros), and Ruby (lobster.) Other sequels include Rampage Through Time for Playstation and Rampage Puzzle Attack for Gameboy Advance. The most recent sequel is Rampage: Total Destruction released in 2006. On the Wii console, 40 total monsters are available for game play. The characters are in 3D but with the same original 2D scrolling screen gameplay. New features included were different modes of play and special abilities like Rampage Mode and Roar Power.

In Nov 2011, the Hollywood Reporter announced that plans for a Rampage movie are underway. New Line Cinema is developing the film with producer John Rickard (Nightmare on Elm Street, Final Destination) attached to the project. New Line Cinema believes that "technology has advanced enough that the possibility exists to make a smartly-budgeted monster movie in the vein and tone of Ghostbusters and Independence Day," according to the report. Early estimates have the film's release in 2013.