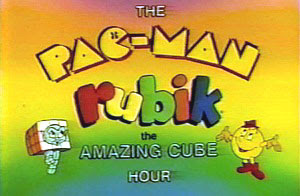 In September of 1982, the most popular arcade game at the time got its own animated television series. The first episode of Pac-Man was so anticipated, that ABC incorporated twice the normal amount of commercials to accommodate sponsors. The first season yielded 26 episodes from 1982-83. Pac-Man was teamed with two other shows during the first season, Richie Rich and the Little Rascals. After a full year of the trifecta TV show, Richie Rich and the Little Rascals would get their own hour together in the fall of 1983 and Pac-Man would team up with show based on a hot '80s commodity, the Rubik's cube. The 3-D puzzle that was named for its inventor Erno Rubik, was mass produced beginning in 1980. The popular toy, that's now sold over 350 million units, was transformed into the animated show Rubik, the Amazing Cube. These two new partnered shows would produce firsts for the animation industry. 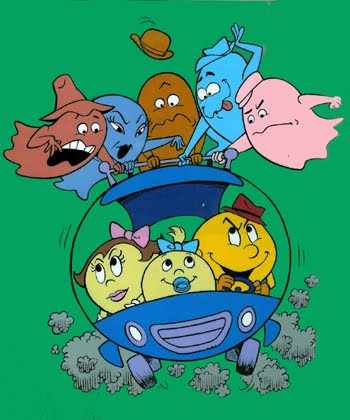 The two shows became one of the most popular hours of television for kids everywhere, despite the newly created stories that were otherwise not associated with either the game or the toy. Pac-Man, the first animated show developed from a video game, revolved around the title character and his family in the town of Pac-land. Each episode usually involved the main antagonists in the video game, the Ghost Monsters. Their boss Mezmaron, a newly created character for the show, was determined to find the source for Pac-Man's power pellets and take for himself. After building a sinister plan, Pac-Man would use his power pellets to send the ghost monsters "packing" and chomp his way to victory. After joining up with Rubik, the Amazing Cube for the second season, new characters were introduced like his nephew P.J. and Super-Pac (not to be confused with Steven Colbert's political action committee.) The popularity of Pac-Man from 82-83 spawned the CBS network to try and mimic the game-to-television success by creating Saturday Supercade. Bally Midway helped the show come full circle and created Pac-Land, an arcade game in 1984 based on the cartoon story and characters.


Rubik, the Amazing Cube joined with Pac-Man's second season to create the Pac-Man/Rubik the Amazing Cube Hour airing in the fall of 1983. Rubik opened the door for future shows like Dora the Explorer by being the first cartoon to showcase an all Latino cast. Three siblings Carlos, Lisa, and Reynaldo were helped by Rubik, a magic cube that escaped from an evil magician. The children would usually need to solve a mystery or problem that required some help from Rubik's powers. Rubik would quite frequently be scrambled and one of the children would need to solve the puzzle to bring him back to life. There were only 12 episodes produced during it one and only season. The Puerto Rican boy band Menudo, known for being the starting point of Ricky Martin's career in the mid 80s, sang the opening theme to the show. There is one full episode posted on Youtube. Here is part one...

With Pac-Man breaking new ground for video game adaptations and Rubik's contribution to the Latino culture, this '80s show combo should be revered as an important one in animation history.