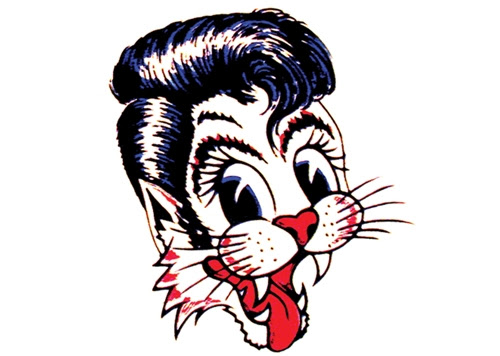 From John Cougar to White Lion...from Eddie Rabbit to Echo and the Bunnymen...from Samantha Fox to RATT, there are many artists and songs from the 80s that feature animal and creature names. (Even one of my favorites, Flock of Seagulls!) This might have been the easiest playlist I've put together so far. I could easily come up with a compilation of about 50 songs, but for the sake of time I'll limit this playlist to 19. Let's go wild and howl at the moon at the Ultimate 80s Animals and Creatures Playlist!

Def Leppard "Animal" (1987)
Couldn't think of a better song to kick off this playlist! "Animal" was released on the album Hysteria in 1987, but it took about two and half years of development to record it just right. It paid off as it became the band first top ten hit in their native UK and was the first of ten consecutive singles to reach the Billboard Top 40 in the US.

CATS ON THE PROWL!
Stray Cats "Stray Cat Strut" (1982)
Thanks to a boost from MTV, these rockabilly felines reached #3 on the US Billboard charts. It would be the band's highest charting single and help their album Built For Speed achieve platinum level sales.

The Cure "Lovecats"(1983)
In 1983, The Cure released the album Japanese Whispers which compiled three previously released singles and their B sides. "The Lovecats" became the first single to reach the top ten in the band's native UK. 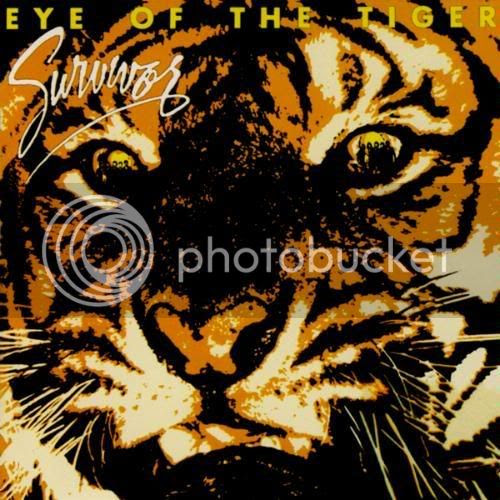 Survivor "Eye of the Tiger" (1982)
The #1 song of 1982, according to Billboard, almost didn't make it into the Rocky III film. Queen's "Another One Bites the Dust" was initially used in the rough cut of the movie, but producers were unable to obtain the rights to use it. At the request of Sylvester Stallone, the song was written for the movie based on a line by Carl Weathers (Apollo Creed) urging Rocky to "get back the eye of the tiger."

Poison "Look What the Cat Dragged In" (1986)
The title track from Poison's debut album wasn't formally released as a single, but is still a prime example of the glam metal sound. The multi-platinum selling album was recorded in just 12 days in March of 1986.

DOG DAYS OF THE 80S!
George Clinton "Atomic Dog" (1982)
"Atomic Dog" reached #1 on the US R&B chart in 1982, despite not appearing at all on the mainstream chart. Its "bark" has transcended beyond charts over the past 30 years. The track has been sampled by at least 40 hip-hop, rap, & R&B acts, most notably on Snoop Dogg's debut single "Who Am I (What's My Name)."

Duran Duran "Hungry Like The Wolf" (1982)
What big synthesizers you have! Heavy airplay on MTV helped "Hungry Like The Wolf" become Duran Duran's first single to chart in the US. With an Indiana Jones-like music video and lyrics inspired by the Little Red Riding Hood fairy tale, its easy to see why the single was a top 5 hit in six different countries

Adam and the Ants "Dog Eat Dog" (1980)
The first track on the Kings of the Wild Frontier album sets the tone for the drum beat sound of the group. "Dog Eat Dog" peaked at #4 in the UK and was also a top 15 hit on the US Billboard Rock chart.

Peter Gabriel "Shock the Monkey" (1982)
Gabriel shocked the US charts in 1982 with his first top 40 hit. Although its music video featured capuchin monkeys, Gabriel claim the song is not about a literal monkey but a metaphor for a jealous feeling.

George Michael "Monkey" (1988)
"Monkey" was the four consecutive #1 single released from his album Faith. He joined the likes of Michael Jackson (Five #1s from Bad) and Whitney Houston (Four #1s from Whitney) as the only music artists to accomplish that feat.

Beastie Boys "Brass Monkey" (1987)
Released on their debut album Licensed To Ill, it peaked at #48 on US Billboard chart in 1987. As with the aforementioned monkey songs, this one does not refer to the animal either but a cocktail drink.

Prince "When Doves Cry" (1984)
Prince was flying high after releasing this first single from Purple Rain. It became a #1 hit in the US for five weeks and a top 20 hit in eleven other countries.

Prince "Batdance" (1989)
Prince scored his forth #1 single in 1989 by incorporating audio from the Batman movie into his "Batdance."  The song is split into two different parts with an dance beat in the first half of the song followed by funky groove in the second half. (Perhaps a tribute to the split personality of Bruce Wayne and Batman.)

Kenny G "Songbird" (1987)
Kenny G's highest charting single was "Songbird" released in 1987. It reached #4 on US Billboard Hot 100 and has since soothed savage beasts the world over. Parodied many times since its release, Kenny G even poked fun at himself during an Audi commercial in 2011.

Culture Club "Karma Chameleon" (1983)
There was no hiding this hit for Culture Club, as the single peaked at #1 in 16 different countries. The track really pushed their popularity to new heights and by 1986, they were on top of the world...appearing and performing on The A-Team.

Whitesnake "Here I Go Again" (1982/1987)
Originally from the album Saints and Sinners, a remixed version of the original single slithered its way to #1 in 1987. Its success can largely be contributed to the music video, which received heavy airplay on MTV thanks to Tawny Kitaen's automobile acrobatics in lingerie.

DANCE LIKE A WHAT?
Was Not Was "Walk The Dinosaur" (1987)
Two years after its release in the UK, this prehistoric track was finally made popular in the US. It's success, like many others, was heavily influenced by the heavy rotation on MTV and the feature film The Dream Team. The song has also been featured in the Flintstones movie and covered by George Clinton for the Super Mario Brothers movie.

Neneh Cherry "Buffalo Stance" (1988)
You want me to stand like a what? Technically, as other songs in this list, "Buffalo Stance" is not referring to an actual animal or the city in New York. Neneh Cherry is referring to a group of fashionistas formed by Ray Petri of which she was a member. Regardless of what everyone thought it meant, it was a hit to the tune of #3 on the US Billboard chart and remains Cherry's most successful single.