Nothing More Patriotic Than Defeating Russians 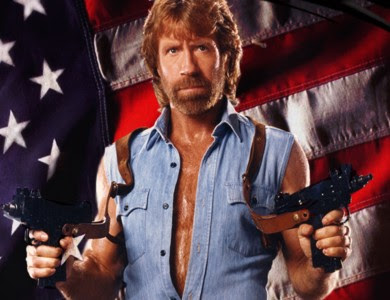 Nothing More Patriotic Than Defeating Russians

As we Americans celebrate our nation's birthday once again, let's take a look back at some "patriotic" 80s actions films that showed us just where those oppressive Russian villains could put their hammer and sickle.

Action films in the 80s seemed to choose Russians almost as the default "bad guys" in many movies. Of course, the cold war was still active and would frequently make its way into current event news throughout the decade. But Hollywood has used Russians throughout the the cold war era, not just the 80s, as the perfect villains for American action movies. The movie villain stereotype of the aggressive, overbearing, world conqueror just seemed to go hand-in-hand with the American concept of Russia. Which makes me wonder, did Russian films depict America in the same way? I'm guessing that the Russian media might have, but doubt that Russian cinema had the same impact as all the American films did on the general public. Not all films depicted the U.S.S.R. hostile takeover of the US or other countries, but most seemed to always have some kind of Russian involvement like in Rambo: First Blood Part II. Even trying to save a few P.O.W.s in Vietnam just couldn't be allowed to interfere with Soviet military dealings 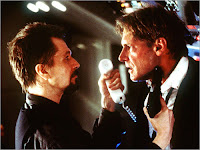 Even today we have movies with Russian villains. The difference nowadays compared to those 80s action flicks is that it's not the entire Soviet Union plotting against the world, mainly because of its disbandment in 1991. Today, we see more groups or individuals depicted with that cold war U.S.S.R. attitude, like the Russian extremists in Air Force One or Teddy KGB in Rounders. I think we still have these Russian bad guys as a direct result of a few 80s movies that really pushed the need for Americans to triumph over the Soviet Union.

Red Dawn - This World War III story was pretty impactful in 1984, the 20th highest grossing film that year. In the alternate universe of European countries withdrawing from NATO, Russian and Cuban forces invade the U.S.A. causing citizens, even teenagers, to defend their country. When Russian paratroopers land in small town Colorado, high schoolers flee the oppression into the wilderness and attempt to help rescue captured citizens (including parents.) This movie depicted the "what if" that was in the back of everyone's mind during the cold war. The movie implies that America ultimately prevails the invasion, but at the cost of desperate measures taken by youthful groups like the "Wolverines."

Invasion U.S.A. - Holy Crap! They're invading Florida? And you thought it was a safe place to retire. So Colorado and now Florida...no place is safe!! My dad and I are big fans of Chuck Norris action movies. And although this 1985 movie wasn't a huge hit at the box office, it was enough of an impact in my mind that it was possible that our Communists neighbors in Cuba could wreak some havoc as well. Also, another point I took away from this particular film was that any attacks by the Cubans would obviously be initiated by the Soviet Union. Any attacks on the US was a direct result of strings pulled by the Soviets.

Rocky IV - Ivan Drago is probably the most recognizable Russian villain of all time mainly because of the success of the film. Rocky IV was the 3rd highest grossing film at the box office in 1985. And although it wasn't a war movie per se, it depicted the American/Russian tension at the time with each boxer a representative of his country. When Drago punches the life out of Apollo Creed, a swelling of American patriotism ensues with a must-win attitude over the Soviets. Of course, we all knew that the US was not undersized and outmatched like Rocky was depicted in the film, but it put in all our minds that when the Soviets come calling...the USA answers.

So those are a few 80s action films that I vividly remember having an impact on my view of Soviet Union. There are many more that showed us those Russian bullies were a force to be reckoned with...but also that they were nothing the good ol' USA couldn't handle. Happy 4th of July!
Newer
Older