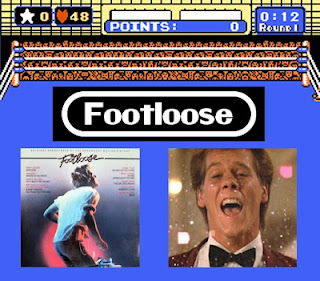 The 80s gave us unforgettable movies, many of which that also had killer soundtracks that were just as good (or even better) than the movie itself. Can you imagine watching the Breakfast Club without hearing "Don't You Forget About Me?" Do you think of John Cusack holding a boombox over his head everytime you hear "In Your Eyes" on the radio? Movies and musics go hand-in-hand, but if you had to choose just one, which would it be? I've decided to start a series of posts called the Movie vs. Soundtrack Punch-out!, in which either the movie or the soundtrack will get knocked out! Each bout will include a brief overview, a look at the commercial success of each and then, the legacy. And since I'm not the only voice in the 80s universe, I will also put up a poll for everyone to cast their vote too!

Footloose is a 1984 film about the small town of Bomont, Utah, which has forbidden dancing and rock n' roll music within the city limits at the behest of the local minister.  Upon moving to Bomont from Chicago, Ren McCormack quickly learns about the unique laws and begins to influence his new friends to help him overturn the laws in order to have a senior prom. New friend Willard eventually becomes Ren's dancing protege, while local girl Ariel also catches Ren's eye. But Ariel already has a boyfriend and also happens to be the minister's daughter. Ren is challenged by Ariel's boyfriend Chuck to a game of chicken with farm tractors. Ren wins the challenge, and subsequently Ariel's heart, but her father forbids her to see Ren. With senior prom approaching, Ren appeals to the city council to lift the dancing ban by reading Bible scripture at a town meeting. His plea doesn't work on the city council, but affects Ariel's father enough to eventually change his mind and allow the teens to hold a dance. An old barn is the setting for the incredible final dance, where even the minister and his wife are seen dancing.

The movie soundtrack featured tracks by Kenny Loggins, Deniece Williams, Bonnie Tyler, and Sammy Hagar to name a few. "Let's Hear It For The Boy" is the background for Willard's dance training montage and is one of the most memorable (and often parodied) scenes from the film. The title track is used in the final scene when the teenagers finally "cut loose" at the prom and really express themselves on the dance floor. All the kids get to show off their moves and we finally get to see Ren's handiwork expressed by Willard. "Holding Out For A Hero" was used during Ren's amazing dance scene in the warehouse. Bonnie Tyler's powerful voice matched up well with the intensity of the scene. Also featured on the soundtrack is "Almost Paradise," the love theme duet sung by Loverboy frontman Mike Reno and Ann Wilson of Heart. 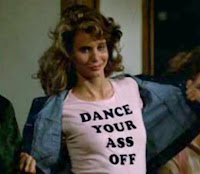 Footloose opened at #1 during its 18 week run at the box office. It would remain at #1 for three weeks and make a total of over $80 million on a budget of just $8 million. The movie soundtrack is the 7th best selling soundtrack of all time, selling over 9 million units in the US alone. Two singles, "Footloose" and "Let's Hear It For The Boy" would go on to be #1 hits on the Billboard charts. "Almost Paradise" would peak at #7, while "Holding Out For A Hero" would also chart at #34. Movie critics have not been very kind to the film over the years and currently has a 56% rating on Rotten Tomatoes.

The 15th anniversary of Footloose in 1999 was a busy one. A Broadway musical based on the film opened that year to good reviews. Keeping pretty close to the original story and also including many of the original songs, the musical received four Tony award nominations. Also in 1999, a 15th Anniversary Collectors's Edition of the soundtrack album was released. Along with the nine original tracks, four new tracks were added including hits "Metal Health (Bang Your Head)" by Quiet Riot, "Hurts So Good" by John Cougar Mellancamp, and "Waiting for a Girl Like You" by Foreigner. And then just last year in 2011, the film was remade with a country feel. Many subtle changes were made including moving the location of Bomont to Georgia, a beginning crash scene which gives a purpose for the special laws, and Ren moving from Boston instead of Chicago. The new film actually holds a higher rating on Rotten Tomatoes than the original. The soundtrack also switched to country music acts remaking many of the original songs.

My vote in this Movie vs. Soundtrack Punch-Out! goes to the soundtrack. My experience has been enjoying the songs actually before I ever watched the movie. It wasn't until the mid 90s that I finally connected the songs to the scenes. I've always been a big fan of Kenny Loggins and his music always takes me back to the 80s very quickly. It's not like I didn't enjoy the movie. I actually like it well enough that I will probably pass on seeing the remake, (add that to the list including the new Karate Kid) but the soundtrack made more of an impression on me than the movie. Now its your turn! Agree? Disagree? Let me know your choice in the comments! If you simply can't decide...you can always vote for both!
Newer
Older