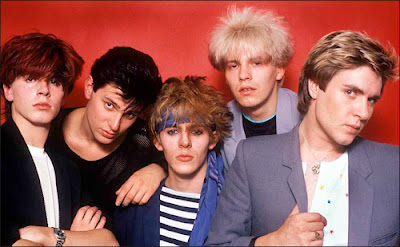 Is your eBook collection running a little low on 80s topics? Yeah, mine is too. That's why I was excited when I was recently contacted from Rhino/Warner Music about their new series of eBooks entitled Single Notes. Each short form book in the series tells about "music and pop culture that builds on Rhino/Warner Music Catalog’s award-winning reputation for insightful and entertaining liner notes by offering today’s top music scribes artistic license to explore the wide range of music-related subject matter that stokes their passions" according to the Single Notes website. Three of these books focus specifically on artists that had a great impact on 80s music.

I've been given the opportunity to write a review about each of these three books, right here on the RD80s website. I'll be releasing one review each week over the next three weeks AND WILL ALSO GIVE RD80s FOLLOWERS A CHANCE TO WIN ONE OF FIVE COPIES OF EACH BOOK!! That's 15 books I'll be giving away in the next few weeks, so stay tuned for details. (CONTEST OVER)

Here is the book lineup that I'll be reviewing. (Photos and descriptions courtesy Rhino.Com)

Non-Stop Erotic Cabaret, the 1981 debut album by British duo Soft Cell. A ten-track carnival of sleaze and squalor… and a pop phenomenon. In two years, Soft Cell racked up five UK Top Ten hits, including the best-selling British single of 1981, "Tainted Love." That cover of an obscure '60s soul song went #1 in seventeen countries, landing in the Guinness Book of World Records. Coupling the electronic grooves of Dave Ball with Marc Almond's over-the-top vocals, Soft Cell ushered in a wave of synth-pop acts: Eurythmics, Yazoo, Pet Shop Boys. Writhing suggestively in black leather and bangle bracelets, the effeminate Almond was beamed into suburbia courtesy of The Merv Griffin Show. For young misfits weaned on jiggle TV, The National Enquirer, and daily abuse dished out by classmates, the duo's black humor and genuine pathos came as a godsend. And the band's lives mirrored their art. While working in New York City, Soft Cell ran rampant through the underground club scene; their EP Non-Stop Ecstatic Dancing was mixed entirely under the influence of ecstasy, and their dealer even rapped on it! Far more than mere "one-hit wonders," Soft Cell fashioned a musical last gasp of pre-AIDS nightlife culture, influencing a generation of artists and fans that followed.

Every Day I Take A Wee:
The Beastie Boys And The Untimely Death Of Suburban Folklore
By Christopher R. Weingarten

Every Day I Take A Wee is an uncomfortably personal memoir of shame, obsession and neuroses, told through growing up in shadows of the brattiest, snottiest, jerkiest, booger-wipingest record that ever existed, Licensed to Ill by the Beastie Boys. Not only a tale about hip-hop's earliest effects on the suburbs, SPIN senior editor Christopher R. Weingarten traces his early years — “pretty much the straight line between ‘fat kid’ and ‘rock critic’” —in hilarious detail. Exploring music's relationship with suburban folklore and urban legends, misheard Beasties lyrics conjure up shocking fantasies, album art minutiae sparks high school screaming matches, and White Castle eating contests are strongly discouraged.

Click the link below to buy from Amazon:
Every Day I Take A Wee: The Beastie Boys And The Untimely Death Of Suburban Folklore - A Single Notes Book

Careless Memories of Strange Behavior:
My Notorious Life as a Duran Duran Fan
By Lyndsey Parker

If you ever paused your VCR so you could kiss John Taylor's freeze-framed face...if you ever named your Cabbage Patch Doll after Nick Rhodes...if you ever pored over Simon Le Bon's "Union Of The Snake" lyrics in search of clues to the universe...if you can pinpoint the onset of your puberty to the time when you saw the uncensored "Girls On Film" video for the very first time...then you will relate to this ultimate chronicle of one girl's very unglamorous, totally one-sided love affair with the 1980s' most glamorous band. In Careless Memories of Strange Behavior: My Notorious Life as a Duran Duran Fan, Yahoo! Music managing editor, unabashed Anglophile, and recovering Duranie Lyndsey Parker chronicles her hilarious and often embarrassing journey from a childhood spent in her Duran-postered bedroom, watching MTV and penning hate mail to crotchety anti-Duran music critics, to her own adulthood as one of Duran Duran's most outspoken professional champions. And along the way, she makes a very strong case for the beloved but misunderstood Boys On Film's place in rock history.

$1.99*
Click the link below to buy from Amazon:
Careless Memories of Strange Behavior: My Notorious Life as a Duran Duran Fan - A Single Notes Book

I'll be reviewing the first book this week and will let everyone know through the RD80s Facebook, Google+, and Twitter pages how to enter the giveaway contest! (CONTEST OVER) If you can't wait, use the links above to order each "quick read" book at a great price!