This week's assignment for the League: Who would you take in an 80′s character fantasy draft? Your team’s goal will be to defeat a shady conglomerate of Russian businessmen and their team of hired ninjas. Keep your team to 5 characters or less. It’s go time.

When will those Russians ever quit? Hiring a team of ninjas to do their dirty work. Well, two can play at that game...and I'll bet that my 80s Dream Team of Ninja Killers will work just for the fun of it. I've been a big fan of fantasy sports since 1998, so I've drafted a team or two. But picking five characters to create essentially an "80s Expendables team" to combat hired ninjas seems like an impossible task for me. Where in the 80s pop culture universe do I even start? Well, I decided that choosing one character from five different realms would help me narrow down the list and also give some variety to my choices. I came up with the following categories to choose from: Cartoons, Comics, Movies, TV, and Video Games. Now that I think about it, this is gonna be too easy.... 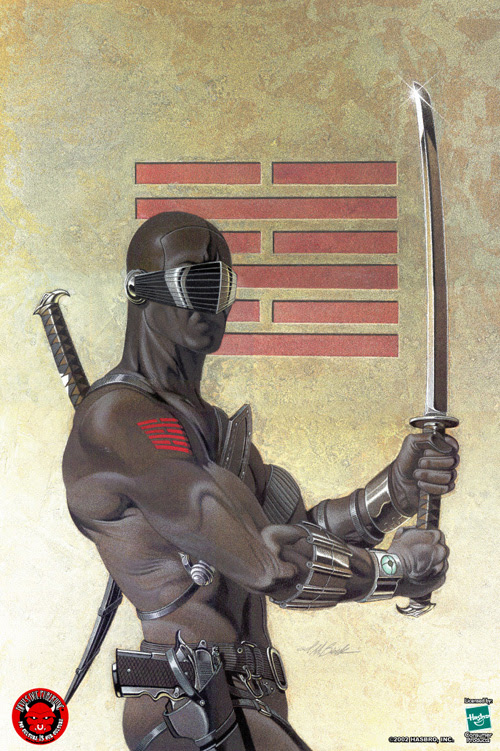 Snake Eyes from the 80s Cartoon Universe
Snake Eyes might be the overwhlemingly popular choice this week by League members...and rightfully so. If you say "name a ninja" to anyone who grew up in the early/mid 80s and probably 9 out of 10 would say "Snake Eyes." It's kinda of ironic that his character was so popular because he really didn't play a major role in the cartoon. But the mystery that surrounded his origin made his character stand out even more when it came to kicking Cobra's butt all over the planet. What made Snake Eyes the ultimate choice for any team was that he was a martial arts master that also used traditional military firearms. He could choose to use his bare hands or a bazooka to take care of business...just depended on what mood he was in.

Wolverine from the 80s Comic Universe
I'm not the biggest comic book fan in the world, but I do know that X-Men was the king of the comic world in the 80s...and Wolverine had alot to do with it. Apart from having retractable claws and being able to heal quickly from wounds, he was also trained in martial arts by the ninja master and sorcerer Ogun in the comic book world. In the final issue of 1984's Kitty Pride and Wolverine, he defeats his master from taking Kitty's soul. Defeating a ninja sorcerer? Yeah, some ninjas for hire shouldn't be a problem. I wouldn't be surprised if he left a little present for the Russian bank roll group after the job was done...what's worse than keying the door panel of a sports car? You can probably guess.

John J. Rambo from the 80s Movie Universe
A soldier who thinks like a ninja. You know what scene I'm thinking about...where Rambo is decked out in mud and sneaks up behind the guy with a knife. That's ninja stuff right there. Send this guy into battle with some hired ninjas and you'll need to remember one thing...a healthy supply of ninja body bags. Bows, guns, knives and bare hands are his deadly weapons. And when the job is done, he can give you lift home in his helicopter.

Colonel John "Hannibal" Smith from the 80s TV Universe
So you have a crew of mercenaries, most of which are used to working alone. You need authority. You need strategy. You need...a plan. Enter "Hannibal" Smith from the A-Team, who's "unorthodox style" is just what this team of 80s Expendables needs to keep the enemy guessing throughout the battle. I wouldn't be surprised to even hear Snake Eyes say "nice" after Hannibal's plan is played out. And don't forget, he often uses disguises to change his appearance...sounds like a ninja quality to me.

Ryu Hayabusa in Ninja Gaiden from the 80s Video Game Universe
If the Shadow Warriors couldn't defeat him, these hired ninjas will have him whistling "When You Wish Upon A Chinese Star" entering the battlefield. With Ryu Hayabusa, it's all about the spiritual strength... but of course, a big ol' katana sword never hurt your cause. Hayabusa's weapons like his "dragon sword," throwing stars, and fireballs are a lethal combination when teamed with his Spiderman like climbing abilities. He wouldn't need motivation like avenging his father's death to fight this ninja mob, but it wouldn't hurt to maybe throw a red sock in the wash with his white headband the day before the showdown.

So there you have it. My 80s Dream Team of Ninja Killers, ready for battle. Can't believe I didn't include Chuck Norris...guess I figured it wouldn't be fair unless the four other team members were Smurfs. Check out who other League members chose for their team:

UnderScoopFire's team includes a talking car and a girl band? What the hell?
MonsterCafe's team consist of an army of one, plus Elvis and a 9 iron. Huh?
GreenPlasticSquirtGun's team includes an elf, an alien, and a boomstick.
ColdSlitherPodcast's team could be named "The Brotherhood of Brothers."
ShezCrafti showed restraint and just choose one ninja turtle for her team.
Newer
Older