The Young Dukes of Hazzard 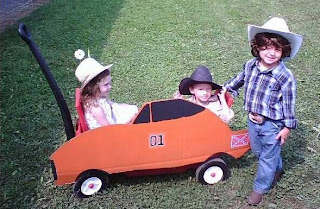 The Young Dukes of Hazzard

This week's assignment for the League: In the spirit of Young Indiana Jones, Young Frankenstein, or Young Einstein, come up with a “Young ___” prequel or series.

Two good ol' boys that never meant any harm...but somehow always found plenty of it. The Dukes of Hazzard was a very popular TV show over its run of seven seasons from 1979-1985 (well, 6 and a half seasons if you forget Coy and Vance like I've tried to do.) There wasn't much not to like about the show as a boy growing up in the 80s...cool car with plenty of chase scenes, funny characters, and a smokin' hot girl. It was a formula that Hollywood thought would be worth remaking in 2005, which some of us are also trying to forget. So let's try a little something new using this week's topic for the League of Extraordinary Bloggers ..."The Young Dukes of Hazzard!"

Die hard Dukes fans will remember that there was actually a prequel to the 2005 film starring Sean William Scott, Johnny Knoxville, and Jessica Simpson titled The Dukes of Hazzard: The Beginning. It was broadcast on cable TV in 2005 and probably could have used the "young" moniker following Bo and Luke in the teenage years. So could going even younger for "The Young Dukes of Hazzard" work? Probably not likely. I'm not sure many people would watch Roscoe on a BMX bike trying to recover his school lunch from the Duke boys on their Big Wheels. (With some of the crap that's on the Disney channel and Nickelodeon nowadays though...it might work.)

So maybe "The Young Dukes of Hazzard" wouldn't work in the sense of kid versions of Bo and Luke. So, since we're exploring a Dukes remake, how about a remake kinda like the recent Knight Rider show did with Michael Knight and son. Okay, so maybe not the best of models seeing that the new Knight Rider was cancelled after one season, but I would make a few adjustments. First, the "young" Dukes would be the sons of Bo and Luke as Knight Rider did with Michael Knight and son. I'd even give John Schneider and Tom Wopat as much face time as they want. After all, these boys would need to learn from the best. Now, a plot. What would motivate the young Dukes to learn how to drive like their fathers? Maybe they could be young aspiring NASCAR drivers? With young drivers like Joey Lagano, I think it might work. But why not turn the tables on the dear ol' dads and have these sons of moonshine runners become cops! Instead of running from the law, they'd make Uncle Jesse do a cartwheel in the grave and join the police academy. Bo, Jr. and Luke, Jr. become partners and use their car chasing heritage to put crooks behind bars. Now, about the General Lee. I don't think I'd have the heart to fully convert one of the iconic cars of the 80s into a new Dodge. I would give the "young" Dukes a new Challenger but the Confederate flag and the 01 would stay retired. The bright orange paint job, however, would be a must.

So there's my pitch. The Young Dukes of Hazzard, sons of moonshine runners who become police partners and use their stout ride to keep criminals off the street. Do you think any of the major TV networks would listen to my concept?