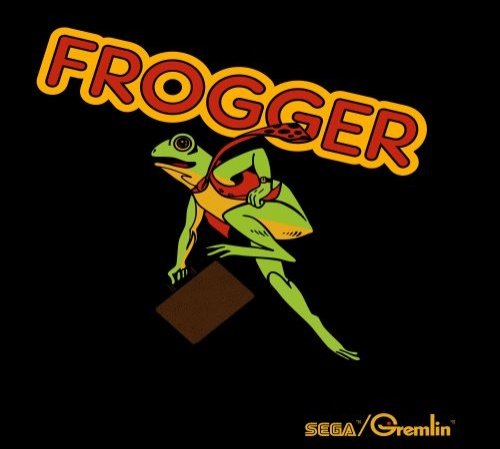 One of the most instantly recognizable video games from the 80s, Frogger entered the arcade in 1981. Over 30 years later, the simple game of highway high jinx is still celebrated as one of the classics. Developed by Konami and distributed by Sega/Gremlin worldwide, Frogger jumped from the neon glow of arcades into homes across the country in just a matter months. After a successful port to home game consoles like the Atari 2600, Frogger soon made an appearance as a mini-arcade tabletop game joining the likes of Pac-man and Donkey Kong. Frogger even got its own cartoon just two years after its initial release to arcades. Several sequels have been made for console versions of the game, but the original remains the only one you'll find in arcades. 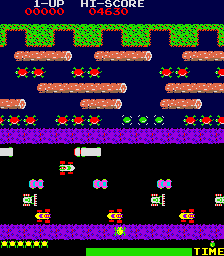 Frogger is a rather simple game in concept. The objective is to avoid traffic on a busy street and use floating logs and the backs of friendly turtles on a river to make it to your home. Fill up the five home slots with frogs and it was on to the next level. As you progressed, faster traffic and logs along with crocodiles, snakes, and otters made it more difficult to guide your frog to its home. Bonus points could also be obtained along the way by eating flies. Frogger consisted mainly of 5 levels, with each becoming increasing harder than the last. After beating the 5th level, the game became easier again as it started over the 5 level progression. Pat Laffaye of Westport, CT, USA holds the Frogger world record by posting a high score of 896,980 points in December 2009.

After becoming an instant hit at the arcade, Frogger was ported to home consoles like Intellivision and Atari 2600 by Parker Brothers. The investment was huge, spending $10 million in marketing alone ($4 million more than movies of the era.) It paid off to the tune of 3 million cartridges sold, becoming Parker Brothers' most successful first year product ahead of the handheld game Merlin. Coleco also got in on its popularity, releasing Frogger and three other popular games as mini-arcade tabletop games. 3 million units would be sold collectively over the course of their production run. Many unofficial Frogger-like games would be released as well, but it wasn't until 1997 that Frogger would get an official sequel on home consoles.

Hasbro Interactive helped give Frogger a fresh look across game consoles and home computers in 1997. It picked up right where the game left off in 1981, selling more than 1 million units in its first 4 months. The new Frogger was actually the final game released for the Super Nintendo System (SNES) in 1988. More sequels would follow though the years including Frogger: The Great Quest in 2001 for Playstation 2, Frogger: Helmet Chaos in 2005 for Nintendo DS & PSP, and Frogger Returns in 2009 for Wii & PS3. In all, Frogger has produced 25 different sequels over the last 28 years. A special 25th anniversary edition was also released for Xbox in 2006.

"Extra! Extra! Read all about it! Frogger writes crazy story Swamp Gazette!" The CBS cartoon show Saturday Supercade took video game characters like Q*Bert, Mario, and Donkey Kong and created a cartoon show in 1983. Frogger ran for 13 episodes in the first season, using the main character as reporter for the Swamp Gazette. As a tie-in from the video game, Frogger would frequently have to deal with traffic and alligators in his journey to get a crazy story for the newspaper. Other inclusions in pop culture include a music track on the 1982 album Pacman Fever by Buckner & Garcia called "Froggy's Lament." A Frogger cabinet arcade game also played a major role in a famous Seinfeld episode where George Castanza attempts to break his high score and finds himself in a real life game on the streets of New York. Frogger was also seen in the movie Wreck It Ralph.

Frogger remains one of my all-time favorite video games, as it reminds me so much of those countless hours I spent at the local arcade. It definitely deserves a home slot in the 80s Arcade.


Thanks as always to Arcade-museum.com and Wikipedia.
Newer
Older
Powered by