Thriller Dance Remains Among The Living With Tribute Performances 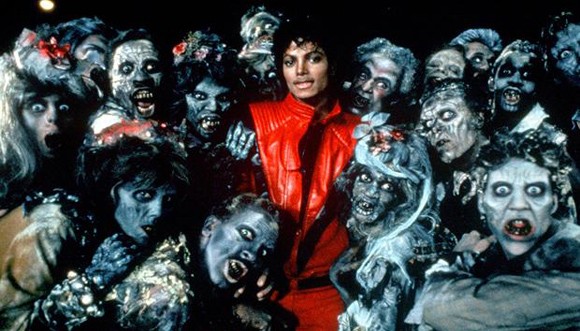 My traditions are pretty typical on Halloween. With two young boys in our house, I'm still "knee deep" in the annual rituals that I remember as a kid. We carve pumpkins, go trick-or-treating, and of course, watching It's The Great Pumpkin, Charlie Brown. Halloween movie traditions are probably a close second to Christmas for most of us. I personally can't go a Halloween season without seeing Thriller, perhaps the greatest music video of all time. The 13 minute 43 second mini-movie has been chosen  many times as the top position on MTV countdowns and "all time" lists throughout the entertainment media...and in my opinion, they have every right. The song after all is featured on the greatest selling album of all time by the "the King of Pop" Michael Jackson. The Guinness Book of World Records holds the video as the best selling music video of all time and the Library of Congress has even added it to its National Film Registry (the first music video to ever be submitted) as “culturally, historically or aesthetically” significant.

Thriller is also one of the most revered music videos by its fans. In fact, the jacket worn in the music video fetched $1.8 million at auction in 2011 proving the level by which it is revered. MTV and cable companies paid $250,000 just for the rights to show the behind the scenes documentary film!! For me, the tradition started mainly from the impression I got as a kid. I remember watching the video when I was around 7 or 8 years old at the local skating rink on their large screen. The video was eventually banned from of all the small kids being frightened. (The part the really scared me as a kid was the very end when MJ turns around with those yellow eyes.) Since then, I've grown to mainly respect it for what it is and remember what it was like watching it at the "Skate Station" as a child.

Over the past several years, I've transitioned to watching the video online and always seem to find a new recreation of the famous zombie dance in the music video. From Hollywood movies to uniformed prisoners, these recreations seem to always reflect how instantly recognizable the video remains after almost 30 years. So, in concordance with my tradition, let's take a look at some of the best Thriller dance remakes over the past several years that keeps the Thriller zombies among the living each Halloween.


CPDRC Prisoners
A few years ago, this video of prisoners recreating the Thriller video went viral across the web. The video (which has now over 51 million views) captures hundreds of men practicing the dance routine at the Cebu Provincial Detention and Rehabilitation Center in the Philippines. The YouTube description explains why Thriller was chosen, if you care to read and form your own opinion of the situation. I'm not sure which was more more revealing to me though, the prisoners being allowed to perform dance routines or the outfit worn by the poor inmate who played Ola Ray's part.


Penn State Nittany Lion Mascot
Many of you know I grew up in central PA and have been a Nittany Lion fan pretty much my whole life. I've always enjoyed the mascot routines that usually happen during the 3rd quarter of home games. So, I was very excited when I found this clip on YouTube from October 2008 of my favorite mascot doing his best Michael Jackson impression.


Surprise Wedding Thriller
About 6 years ago, this video was uploaded to YouTube of a wedding party surprising their reception guests with the Thriller dance. Since then, it's received 13 million views and spawned a wave of surprise wedding and flash mob performances on the web.

Sobe Superbowl Commercial
In 2008, the beverage company Sobe got in on the 25th anniversary of Thriller with a Superbowl commercial that had everyone talking arounf the water cooler the next day. The lizard mascot struts his stuff for an attractive woman after getting a taste of Sobe's Lifewater drink.

13 Going On 30
In 2004, a scene in the feature film 13 Going On 30 had Jennifer Garner encouraging Mark Ruffalo to join her on the dance floor. Garner plays a 13-year old (in 1987) who finds herself trapped in her 30-year old self seventeen years later. She tries to add life to a dying party by dancing to Thriller.


Rodimus Prime Time
Just this year I've found another video to add to the Thriller tribute collection. This is definitely my new favorite which has Transformer Rodimus Prime taking the role of MJ and leading the Autobots in the Thriller dance. Some nice touches to the video are the Decepticons appearing as ghosts and joining in the dance, plus the whole crew tracking down Soundwave in zombie style at the end.