The Yin and Yang of Ferraris

The Ferraris of Miami Vice

So I recently began watching Miami Vice again and with it came the eternal question...which Ferrari better defined the show? Or maybe, which Ferrari was better suited for Crockett's cover as a yacht-owning, sportscar-driving drug dealer? Or better yet, how dumb were all these criminals and dealers that word never got around in 5 years that "Sonny Barnett" was a Vice cop? Okay, I'll save that last one for another day.

There was a certain trend that was set in 1984. I'm not just talking about the no socks or pastel shirts & white jackets. I'm talking about when Miami Vice busted you, it was with a certain swagger. They didn't wear the monkey suits that federal agents wore. They didn't just shoot you...they waited for you to get near a glass wall or railing overlooking a body of water so you could die with style. And they most certainly didn't drive a boxy undercover squad car, they drove a Ferrari...or did they?

For the first two seasons and two episodes into the 3rd season, Crockett drove a black 1972 Ferrari Daytona Spyder 365 GTB/4. The two-seater convertible used in the show was actually not a Ferrari at all. After Ferrari wanted the show to use authentic cars, show producers decided against spending the big dollars for the cars and hired manufacturer Tom McBurnie to produce two stunt cars using a Corvette chassis and body panels. Nevertheless, the make-shift Ferrari became one of the signatures of the show.

After Enzo Ferrari filed a lawsuit against the manufacturer of the fake sportscars in 1986, the producers of the show agreed to demolish the original cars in exchange for two new Ferrari Testerossas. And destroy they did...blowing up Sonny's pride and joy with a stinger missile in the debut of season 3 after an arms deal gone bad. Sonny appealed to Lt. Castillo about a new ride and ended up finding it parked "out back." The new white Testarossa was actually a metallic black when received from Ferrari and painted at the request of producer Michael Mann to better stand out in the night scenes. 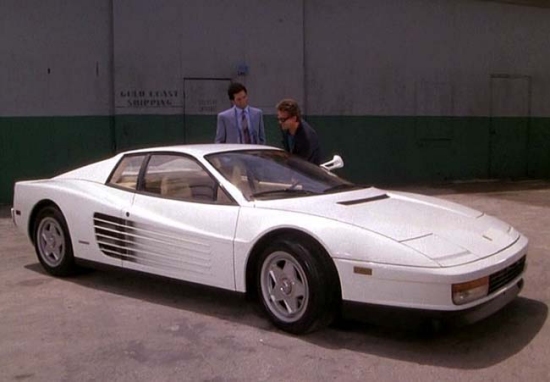 So, which is my favorite? Tough call. The Testerossa is the epitome of 80s sports cars and the white color made it stand out on the show. Once it came on the scene, it was almost like a third member of the team...at least more so than Switek or Zito. But my favorite was the original. There's just something about TV shows with black vehicles (see Knight Rider and The A-Team.) Even the fact that the original Ferrari was as fake as the corded car phone they used inside really doesn't bother me. The original car was more part of the Miami Vice repertoire than the flashy Testerossa which seemed to fit better to me. And the look on Crockett's face when it blew up told the whole story. And plus, the wardrobe stood out more when you leaned against it. You want the girls to see the car but not lose their focus on you, get it?

So the original black Ferrari has my vote. Leave a comment with your favorite Miami Vice Ferrari and/or moment from the series.
Newer
Older