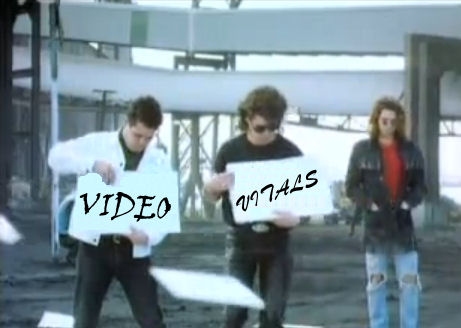 I've always been a numbers kinda guy. Love statistics and breaking down every element of what goes into making something. (Pre-Calculus in high school will do that to you.) Maybe I'm crazy or just OCD, but I believe I've discovered a way to satisfy my personal need to crunch numbers and get my 80s music fix...over-analyzing music videos! My initial inspiration for "Video Vitals" came while listening to INXS' 1987 track "Mediate." It's the song that segues from the #1 hit "Need You Tonight," released on their multi-platinum Kick album.

As I was sitting at a long traffic light one night on my commute home and listening to the track, I tried to count the "ate" rhymes in the song. (I lead an exciting life.) After two attempts, I came up with conflicting numbers. Then I remembered the music video of the band flipping through cue cards of the song's lyrics (inspired by the promotional film released for Bob Dylan's 1965 single "Subterranean Homesick Blues.") I figured I'd watch the video when I got home to help me get an accurate count. But not all the cards were direct from lyrics or used the "ate" rhymes. So I proceeded to start jotting down some notes and before too long, I decided my lengthy list of stats needed to be somehow posted on RD80s. So here we go!


Watch the video below and then check out the Video Vitals below...


"Mediate" Video Vitals
SONG/LYRICS
Total run time of the video/song is 2 minutes and 36 seconds. 94 total "ate" rhymes are used throughout the song, an average of one every 1.66 seconds. Only 49 of the 94 total rhymes are unique with "liberate" the most common at 5 times thanks to the echo at the end. The lyrics begin to repeat after "we all rotate" at the 1:12 mark. Kurt Pengilly's ending sax solo lasts for exactly 40 seconds.

VIDEO
During the video, only 5 of the 6 total band members are shown at any given time. All of them are wearing at least one article of clothing that is black. There are 6 peace signs shown throughout: 4 written on the cue cards, 1 on John Farriss' jacket, and 1 on Kurt Pengilly's shirt. 5 different work trucks drive past the band in the background. A person walks in front of the camera at the 0:24 mark. The speed of the music video is slowed down one time at 0:40 and sped up one time at 0:54 to coordinate the cue cards with the lyrics. 2 errors are made while the band members cycle through the cue cards: The "don't" and "hate" cards in Michael Hutchence's stack are out of order with the lyrics at the 0:19 mark and Tim Farris erroneously pulls the "animals" and "debate" cards at the same time at the 1:42 mark.

CUE CARDS
97 total cue cards are used during the video and are split among the band as follows:

6 cue cards do not contain lyrics. The very first card is blank, one card shows "9-8-1945" (which references the date of the atomic bomb drop on Hiroshima,) one card shows a question mark, two cards have drawings of an mushroom cloud and a peace sign, and the last card reads "sax solo." 5 words are misspelled. "Wait" is written twice on the cards for the lyrics "Earth's own weight" and "ate" is written once for the lyrics "The Number 8." 4 words are unnecessarily hyphenated.

And that's a wrap! So, did I make you want to watch the video again and do some fact checking? Feel free! Scroll up and watch it this time with one of the Video Vitals I've listed. Fill your statistical void.

Got an '80s music video in mind that is worthy of a statistical breakdown? Leave a comment and I'll see if it's worthy of a future Video Vitals post! (and give you the cred for the suggestion, of course.)
Newer
Older
Powered by