The Best of Lionel Richie In TV Commercials 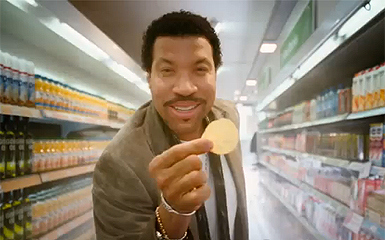 Maybe he doesn't collect enough royalty money? Nope, he's the highest paid singer in the world for 2013 according to People With Money. Maybe he likes being on television across the globe rather than touring? Nope, he embarked on a European tour in 2012 and just announced this month that he's planning a North American tour in 2013. OK, maybe he just has a great sense of humor? Well for whatever reason, Lionel Richie and his music from the '80s continue to appear in TV advertisements throughout the world. His latest is for the Australian Tap King home beer tap in which he sings his mega hit "Hello" from inside a fridge.

It made me remember a few others I've seen and wondered how many others ads have been done over the years featuring Richie himself or his music? After a quick Google search, it was clear that a list of his best ads must be compiled. He seemed to have caught the advertising bug early as I found a magazine ad for a Commodores Tour sponsored by Schlitz beer with minimal effort. Let's see what other gems he's been in over the years.

Walkers Extra Crunchy Potato Chips (2010)
Holding a 47% share of the UK market, Walker chips...err...crisps definitely have the advertising power for any ad campaign. Now a subsidiary of PepsiCo, American influence is noticeable in Walkers marketing with their current logo resembling Lay's and using American music in their TV commercials. In 2010, Walkers used Richie and his #1 hit "Say You, Say Me" to promote their Extra Crunchy crisps. In the ad, Richie learns that it's not always easy to share them.

When Pepsi comes a knockin', your choreography skills better be a rockin'. And they recognized Richie's skills were rockin' as they featured him in their "choice of a new generation" campaign in '85. With the company of super celebrities Michael Jackson and Michael J. Fox during the same Pepsi campaign in the mid '80s, it was an whole new level of endorsement status for Richie.

Two different ads using the same original song were produced with one appearing during MTV's broadcast of Live Aid. That one seemingly features a young Jaleel White aka Steve Urkel at the 0:11 mark giving a Arsenio Hall "woot" gesture. (I can't make this stuff up.)

Starburst (2005)
There are some sick people in advertising (I can say that as I have been in the business for several years.) But with sickly, creative minds you get hilarious TV spots like this one for Starburst. Using "Hello" as the background music and a spoof of the music video, we get a make-out session with boy and a Starburst sculpture of his favorite girl.

Taco Bell (2013)
Everyone knew they were coming. Once Doritos and Taco Bell finally joined forces in 2012, we all knew it was just a matter of time before they would introduce the Cool Ranch flavor. THEY MADE US WAIT A FREAKIN' YEAR! By the time we started to hear the rumblings of a release date, we were all desperate to try them. So how did Taco Bell express our desperation? "Hello" in Spanish.

Tesco (2012)
Can't talk advertising without a little Black Friday. Tesco is the Walmart of Europe and the 3rd largest retailer in the world. In a 2012 campaign for their point-earning Clubcard, they featured Richie's "Hello" and everyone's favorite Christmas MacGuffin the Ferby doll to sync their rewards program with happy little children on Christmas morn.

Mountain Dew MDX (2005)
When Coca-Cola showed success with its Vault energy drink in the mid 2000s, Pepsi quickly released its version under the Mountain Dew label. And how does one market extra energy throughout the day and night? Why by having nocturnal animals sing "All Night Long" of course!

Toyota (2012)
To promote the new reinvented Camry during Superbowl XLVI, Toyota decided to reinvent numerous other items. The idea was to give the people what they really wanted including a couch made out of bikini babes, pizza curtains, and a fun house at the DMV. What they also gave us was some mood music while we blend...


The Dog Whisperer (2013)
NatGeo climbed aboard the "Hello" train this year with its ad for the new season of Dog Whisperer. It features Cesar Milan having a wet dream (dogs licking him...come on, people!) with Richie playing in the background.

Yahoo (2010)
In 2010, Yahoo produced a series of ads with popular music including "Home Sweet Home" by Motley Crue and Richie's "Hello." Unfortunately, I haven't been able to find it on YouTube or anywhere but it bears mentioning as many of you remember how ridiculously awesome it was. If you find it link for it, please add it to the comments!

I didn't want to leave this post on a downer since I couldn't find the Yahoo! ad that apparently was pulled from YouTube. So, here is Richie video I found quite amusing. It's not a TV commercial but rather a mash-up of movie clips that recite the lyrics to "Hello" created by The High Definite. It is what you've been looking for.