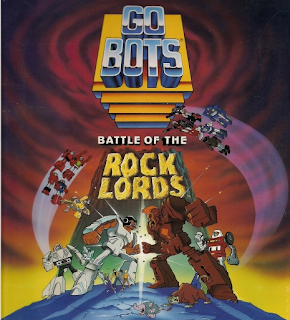 There are dozens of '80s cartoon shows and movies that have never received the red carpet treatment and been released to DVD. But for whatever reason, I find myself less irritated when I find episodes and full movies on YouTube. I was pleasantly surprised to stumble across the Go-Bots: Battle of the Rock Lords movie recently!

Call them knockoffs or posers if you like, but the GoBots franchise were a nice rival to the Transformers for several years in the '80s. As a kid, I enjoyed the cartoon (yes, even Scooter) and collected many of the toys. A couple years ago I regrettably parted with the few GoBots I had and my Command Center to feed my M.A.S.K. obsession. As I continue to go through boxes of my memories, I did happen to find a Loco and also the Rock Lord Magmar (pictured right.)

I really don't remember much about the storyline as it has been a long time since I watched the Challenge of the GoBots series. The show lasted 65 episodes from 1984-85 and later appeared in syndication on the USA Cartoon Express. Transformers was clearly the more popular franchise but as a last ditch effort, Hanna Barbera produced the feature film Go-Bots: Battle of the Rock Lords in 1986 to introduce new characters and perhaps revamp the franchise after the TV series ended. The film only pulled in about $1.5 million at the box office and resulted in the GoBots ending their animated run. I'm curious to find out how the movie holds up and thought I'd share my discovery as it nor the complete animated series has ever been officially released to DVD. I've got the movie embedded below or pull up on YouTube at your convenience.

Other stuff I've found on YouTube:
G.I. Joe: The Movie
I Was An MTV VJ
Rebuilding Ecto 1
Newer
Older