Download A 'Bitchen' '80s Book For Free, Enter To Win A Signed Copy! 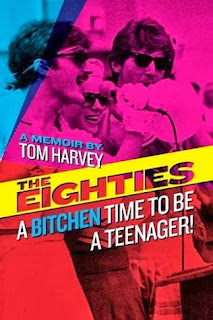 'Bitchen' is one of those words that was widely used during the '80s. It's main use was to describe how awesome something was. For example, "did you see that new show Knight Rider last night? That talking Trans Am was totally bitchen!!"

The same can be said for Tom Harvey's memoir The Eighties: A Bitchen Time To Be A Teenager. What I like about 80s memoirs is being able to rediscover everything I loved about the decade from another person's perspective. For me, it enhances my memories when I read about how someone else experienced the same moment in time. Check out what Tom's memoir is all about:

The decade of the 1980s has been called the Decade of Decadence. Decadence is defined as "the act or process of falling into an inferior condition or state; deterioration; decay" or my favorite, "unrestrained or excessive self-indulgence." For a decade that brought us Cabbage Patch Kids, Garbage Pail Kids, leg-warmers and New Wave, was it really self-indulgence?! For one kid growing up in the Central Valley of California, it was a time of self-discovery . . . a transformation from a kid, to a teenager, to a young adult . . . his growing up years.

At times utterly hilarious, at times poignant and powerful, Tom relives his teenage years in this true-to-the-last-word memoir. Where were you when John Lennon died? When the Space Shuttle blew up? When Lawrence Taylor ended Joe Theisman's career on live TV? When the Loma Prieta earthquake rocked Game 3 of the 1989 World Series? Tom will tell you where he was and what it meant to him. You'll also hear about first kisses, first loves, a joke about your Uranus, avoiding fistfights, the joys of minimum-wage jobs, college roommates, and WHOLE LOT MORE. If you're one of the 70 million Americans who can claim at least one teen year in the decade, you can relate to the era . . . if your kids can't understand your fondness for your Breakfast Club and Princess Bride DVDs, this book may teach them a thing or two about YOUR growing up years. Go ahead, say the word "bitchen" outloud. Yeah, it was a bitchen time, the Eighties . . . (and, yeah, the word can be spelled "bitchen" or "bitchin'" - the author prefers the former . . . )

For a limited time, Tom is offering his memoir (and new book) to download for free in the Amazon Kindle store! Plus, he was gracious enough to send me a couple autographed paperback copies awhile back so now through Monday Oct 7, visit the RD80s Giveaways Page or the Punchtab Rewards Page on Facebook to enter! (Earn extra entries by connecting with RD80s and Tom Harvey on social media!)