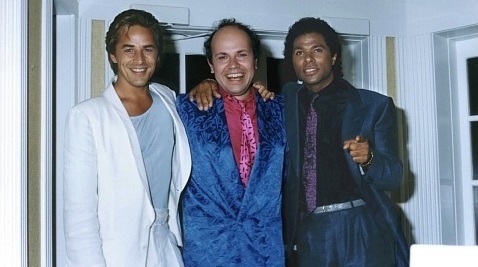 Over 30 years ago now, Jan Hammer was on top of the music world. On November 8, 1985, his theme for the hit TV show Miami Vice held the #1 spot on the Billboard Hot 100 singles chart in the United States. It marked the last time that an instrumental track had an impact of that magnitude on the charts. His musical contribution to 90 episodes of Miami Vice also earned him two Grammy and two Emmy awards.
Although he was already an established keyboard and synthesizer player releasing albums as both a solo artist and with several groups, the overwhelming success of the "Miami Vice Theme" generally clouds his musical accomplishments. So much so, that recently I asked myself after watching an episode of Miami Vice, "what else has Jan Hammer done?" After I took a quick glance at his career, I was pleasantly surprised at my findings and felt it was worth putting on display (I'm sure you'll feel the same way too.)

Here are 11 facts about the "king of the keytar" and his music that you might not have known:

Hammer is originally from Prague, Czechoslovakia (Czech Republic) and in his native tongue, his first name uses a "y" sound in English. "Jan" is also the Czech equivalent to "John" in English.

"Schon & Hammer" released Untold Passion in 1981 and Here To Stay in 1983 which featured the a cover image that parodied the famous "Arm & Hammer" logo. The track "Self Defense" from that album featured Steve Perry on background vocals and the "No More Lies" video received airplay on MTV.


Scored the 1995 film Beastmaster III: The Eye of Braxus

The film starring Marc Singer was released to TV in 1996 and would be the final sequel in the Beastmaster series of films.

The single was released as the "Jan Hammer Project feat TQ" and peaked atop the European iTunes download chart. According to Miami Vice Wiki, the track is thought to be initiated and released by Hammer as result of not being including in the 2006 Miami Vice remake film. I also found a Youtube video that uses the Miami Vice reunion episode of Nash Bridges to reconnect the song with Don Johnson.

Scored two episodes of "Tales From The Crypt"

The 1989-96 HBO horror series released a soundtrack in 1991 which featured Hammer's theme from the "Three's a Crowd" episode along with composer Danny Elfman's main title.

Hammer also released the track on his 1994 Drive album.


Composed over 70 themes for Czech TV

From 1996-2000, Hammer was commissioned with providing all the original music for the first television network based in the Czech Republic known as "TV Nova."

Hammer also appeared in two episodes, "One Way Ticket" and "Like A Hurricane," both times as a wedding musician. A behind the scenes featurette was also released about the making of the video.


"Crockett's Theme" was also featured in a 1987 video game

Most Grand Theft Auto fans remember "Crockett's Theme" being featured on the Emotion 98.3 radio station in 2002's Vice City video game. It was actually 15 years earlier that the same instrumental track first appeared in a video game. Mike and The Magic Dragon first used the track on the Commodore Amiga home computer.


Scored the "Beyond The Mind's Eye" CGI music video

Thought to be a milestone in computer generated imagery, many of the Mind's Eye series of videos released in the 1990s would go on to sell millions of copies. Hammer would contribute the soundtrack to the 2nd video in the series released in 1992 that were notably shown in electronics stores like Radio Shack.


Once rocked on stage with Eddie Van Halen

In an amazing clip from the Les & Friends concert in 1988, Hammer joins Eddie Van Halen and bassist Tony Levin on stage for a crazy rendition of "Hot For the Teacher." Les Paul himself exclaims it was "fantastic" at the end of the performance.


Find out more about Jan Hammer at his official website JanHammer.Com
Newer
Older
Powered by