How I Discovered A Perfectly 'Krafted" '80s Tribute By Coldplay 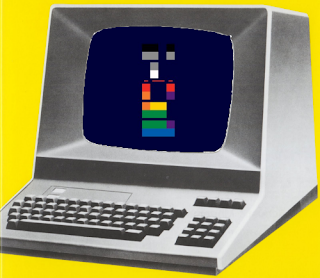 There are only a few modern bands that I can honestly say "I'm a true fan." That is, I genuinely get excited when I hear they are working on a new album and then, buy said album on or near it's release date. I discovered Coldplay in 2001 after hearing the song "Yellow" on an Atlanta radio station and have enjoyed their music since.

My favorite album is X & Y which was released in June 2005. I remember that summer very vividly. It was unbearably hot as it is most years in the Southern US. Seven months earlier, I had become a father for the first time and decided to give up my practically brand new air-conditioned truck (our family vehicle at the time) to my wife and son so they could stay cool in the summer months. I took her 1993 Honda Civic whose only working A/C was power windows and a sunroof. I was willing to make the sacrifice, but what I hadn't thought out was that it also had only a tape deck.

By this time, I was deep into the A Rush of Blood To The Head album and was eager to buy the new album. Thanks to my company at the time, which held season tickets to everything at Philips Arena, I managed to secure a couple tickets to Coldplay's Twisted Logic tour show in September. After searching high and low for a blank cassette tape, I managed to create my first mixtape cassette in years in anticipation of the concert. With a 30-45 commute each way and a solid three months, I learned the songs on the X&Y album and experienced what I feel like is the 2nd best concert in my years (just behind Phil Collins in 1994.) After Coldplay's debacle with Joe Satriani in 2008 over "Viva La Vida," I somehow discovered through the internet that a track from X & Y contained a riff from an '80s song. "Talk," which is probably my 2nd favorite track on the album, is inspired by the 1981 single "Computer Love" by the German band Kraftwerk. This was news to me and in light of the allegations of "ripping off" Satriani, I was worried this was going to be another Vanilla Ice moment for me.

Being from the US, my depth of '80s European bands are mainly limited to popular pond jumpers like Depeche Mode and Tears For Fears. With Kraftwerk's only US success being the 1975 single "Autobahn," I wasn't aware of their revolutionary electronic music until reading the story. What I found was Coldplay's lead singer Chris Martin was a fan and actually asked permission to use the riff on their new album. According to this article, Martin wrote a letter to Ralf Hutter of Kraftwerk who gave consent. Martin was quoted in the article that "it's extraordinary that they said yes."

With Martin's plea for permission, it made me side with them in the "Viva La Vida" case a little more I guess, although I believe they did come to some closed-door settlement with Satriani. But what it gave me more of was appreciation for "Talk" and the story behind it. It wasn't just a sample, but a band giving another band the ultimate musical compliment. And this perfectly "krafted" '80s tribute to a pioneer band in electronic music is definitely one of my favorite "inspired by" tracks...