Behind The Scenes of Radio Shack's '80s Superbowl Commercial 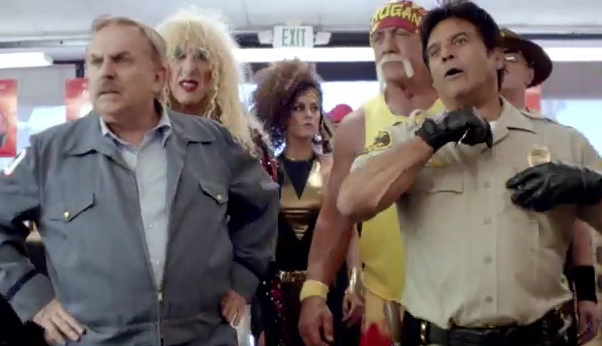 In case you were one of the few who missed last night Superbowl, fans of the '80s have been raving about Radio Shack's new commercial that debuted during the big game. "The Phone Call" features a slew of '80s icons like Hulk Hogan, Dee Snider, ALF, Cliff Clavin from Cheers, Erik Estrada aka "Ponch" from CHiPs, Mary Lou Retton, and Teen Wolf raiding a Radio Shack store for old electronics to the tune of Loverboy's "Working For The Weekend." The clever ad refers to Radio Shack's glory days in the '80s and how their stores are remodeling to receive a fresh new look. Check out the ad below...


My first reaction to the :30 version during the game was "That was great! But did they really pull all of those people together?" So much '80s was crammed into the spot that it just didn't seem they actually got all of those people and some had to be body doubles. After seeing the full one minute version (including the Slimer ending, LOVE IT!) it appears that save for Michael J. Fox actually being inside the Teen Wolf costume and the real Devo, pretty much everyone is legit! The ad is actually the beginning of a series of ads, but before we get into that, check out this behind the scenes look at the making of "The Phone Call."

Wow, Radio Shack went all out didn't they? And that's just the start! Upon finding the behind the scenes video, I discovered four more commercials with some of the individual characters. First, to promote the new 3D printer available in stores, Radio Shack uses Jason from the Friday the 13th series in this spot titled "Jason and the 3D printer."

The next spot titled "ALF's cell phone" features our favorite furry alien trying to play music on his old brick phone. The employee then proceeds to show ALF the features of the new smartphone.