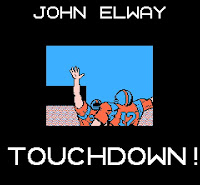 From arcade cabinets to handheld electronic games, sports was a great fit for the video game world. In 1988, one game took sports gaming to the next level by allowing us to take control of our gridiron heroes. First in the arcade and then on the NES, Tecmo Bowl was widely received among sports gamers with the ability to control real NFL players like Joe Montana and Lawrence Taylor. The sequel Tecmo Super Bowl added more players, expanded playbooks, and all 28 NFL teams to make a foundation for future highly successful games like Madden Football.

NFL Films, the motion picture archive company for pro football, honored Tecmo Bowl with its own episode in the running series NFL Films Presents. The film crew set out to talk with NFL players like Tony Gonzalez and their experience playing the game. They also met with gamers who still play today including the largest tournament in the country in Madison, WI. They managed to also track down one of the most famous NFL players in Tecmo Bowl history, Christian Okoye and get him to play the game for the very first time. His reaction to a YouTube video of a gameplay with him running out the clock of a whole quarter while scoring a touchdown is also included. Watch the entire episode below...

I have very fond memories of playing Tecmo Bowl with friends in the late 80s and early 90s. I'm glad that NFL Films recognized its heritage as the grandfather of modern football games. I also invite everyone to explore the online community at TecmoBowl.Org, which has been connecting gamers for years. They've even hacked the original game to offer a free downloadable game with modern day players.
Newer
Older