Voltron at 30: A Brief History Of Defending The Universe

Are we really this old? Has it truthfully been 30 years since the Voltron Lion Force pounced into action and those five courageous space explorers searched out the legendary, mighty robot Voltron?

Yes, it's true and three decades have amazingly passed since Voltron debuted on September 10, 1984 in first-run syndication. So, today is the opportune time to share our love for Voltron and take a brief look back at it's history. First, let's take a look at what initially captivated us. Why were we intrigued by the lions, the Voltron Force, and the famed Castle of Lions on planet Arus?

My interest came basically from this large piece of robotic machinery that used the simplicity of keys together with the complexity of worldly elements to power its parts. The lions ability to form the gigantic, invincible savior robot is what also compelled me to watch. Even today when I rediscover episodes of Voltron, I still get goosebumps when that trumpet music is married with the characters exclaiming...

"Ready to Form Voltron! Activate Interlocks, Dynotherms Connected, Infracells Up, Megathrusters are go...Let's Go Voltron! Form Feet and Legs, Form Arms and Body, and I'll Form the Head!!"
Those same goosebumps also appear when it is time to "form Blazing Sword!" Who else emulated that sequence as a child?

When World Events Productions, Ltd introduced us to the Vehicle Voltron Force, my mind continued to be blown away by this tremendous compilation...especially when both Voltrons met one another in Voltron: Fleet of Doom. Remember the Vehicle Voltron's formation?

Also what is interesting to note is that the animation was not originally created in America. Rather, the cartoon came to the U.S. from Japan originally titled "Beast King GoLion" with the Vehicle Voltron named "Armored Fleet Dairugger XV." WEP and Toei Animation teamed up to create and re-name these titles as Voltron. In fact, another Voltron was in the works and was actually introduced in the toy line, but unfortunately never appeared on television.

Though as fantastic as the Vehicle Voltron was, the Lion Force team seemed to be a stronger hit, spawning Voltron: The Third Dimension. Premiering in 1998, this CGI 3D series took the Lions into fierce battles primarily with Prince Lotor. Spirit-willed Lions also introduced us to a Stealth Lion Voltron...

In 2011, Voltron Force premiered on Nicktoons with a completely remolded lion Voltron. Instead of the typically squared off version with subtle differences, each lion is a completely unique breed such as the Blue Lion's resemblance to an actual mountain lion and the Black Lion's resemblance to a maned male lion. The historical storyline of Voltron was also changed. Instead of Voltron being divided by the power of Hagar the Witch, the modern Voltron was created through a combined effort of five unique planet "tribes." To captivate even the faithful Voltron follower, each lion can now become the body and head with their own unique "blazing weapon." For instance, a red center Voltron used Blazing Magma Pistols but a yellow center Voltron used Blazing Rock Wrecking Maces. Voltron Force used three new cadets/team members as well... 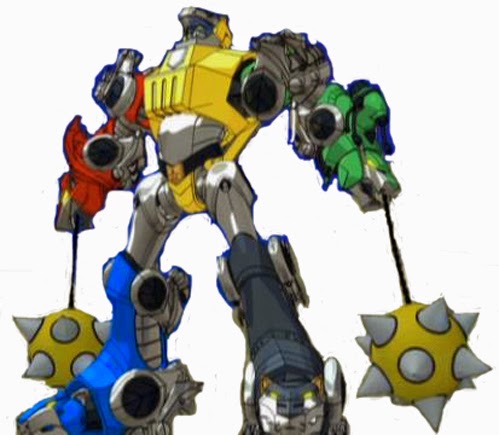 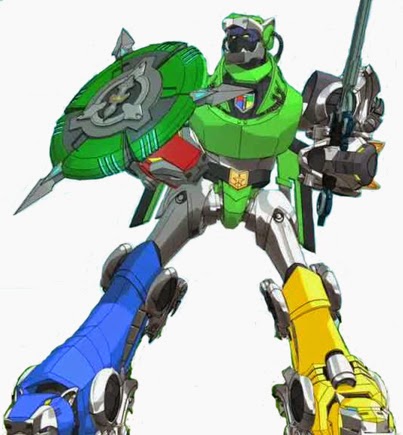 But wait, there's more! Voltron comic books and toys have always been a craze among fans. Most recently, comics were produced from 2002 - 2011. Toys have amassed from the very beginning including a 30th anniversary die-cast set and Voltron apparel. (plus much more at Voltron.com)

Voltron's entity of multiple robotic components creating a single, large robot seemed to be emulated by other entities as well over the years. The Transformers cartoon incorporated the idea with creations like Decepticon Devastator and the Mighty Morphin Power Rangers used the concept as well. Voltron has also been discussed to be developed into a live action movie, though nothing substantial has been confirmed.

We join in with other celebrations from Voltron HQ-WEP, the Let's Voltron Podcast, and other fan sites to share in the legend and the legacy of Voltron: Defender of the Universe!