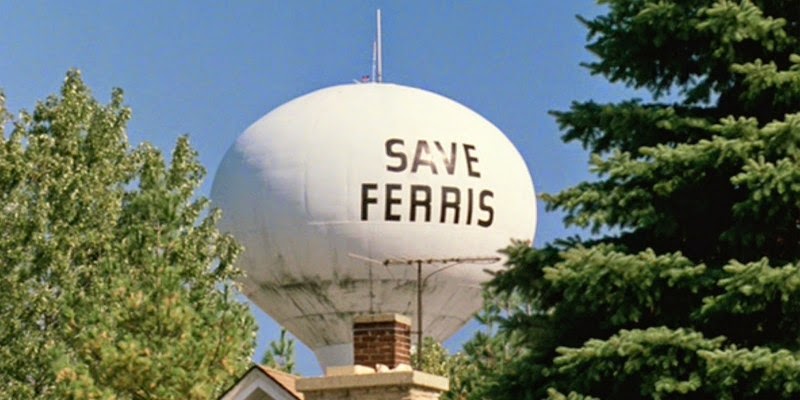 If you've been following me for awhile, you know I'm all for great documentary films about '80s pop culture. I've featured several completed movies and have also had several filmmakers inform me about their projects which is the case for today's feature documentary Saving Ferris by Road Trip Film Productions. I was recently contacted by Noah Graff who filmed and stars in a documentary that chronicles shooting locations around Chicago then-and-now from Ferris Bueller's Day Off. Watch the trailer and then read Graff's own description of the film...

I recently made a documentary entitled “Saving Ferris” about the Chicagoland locations of my favorite movie, “Ferris Bueller’s Day Off.” In the documentary, I go to almost all of the filming sites of the movie, from the Sears (Willis) Tower, to Wrigley Field, to Cameron Frye’s famous garage that housed the Ferrari California Spider. I talk about where and what each location is and how they have changed over the last 25 years, but I also strive to recapture the experience of Ferris’s perfect day. I attend a Cubs game, drive down Lake Shore Drive in a Ferrari, and run through the same North Brook backyards by Ferris at the end of the film. I even got up on a float at the Von Steuben Day Parade and sang Twist and Shout (No lie). - Noah Graff


The 30 minute film is broken up into 14 segments, 6 of which are now available to view on YouTube! Of those episodes currently available, topics include "Ferrari", "Shermer High School," "Garage," "The Ride," and "Sears Tower." Over the course of the next month or so, the remaining segments will be released at the pace of about 2 episodes per week until the film is complete.

It's easy to tell that this is a documentary made truly for fans who have imagined themselves in Ferris Bueller's shoes. You can watch all the episodes below or bookmark/visit the Saving Ferris playlist on YouTube. Also be sure to like Road Trip Film Productions on Facebook in appreciation for the film and the latest updates!