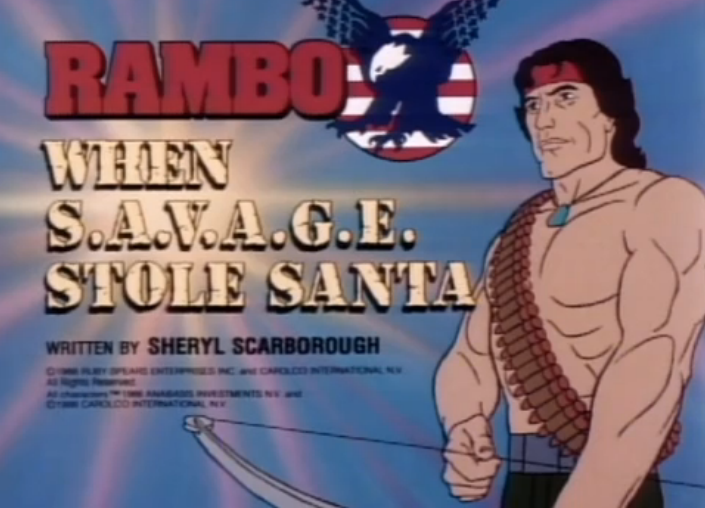 Christmas is my favorite holiday and I thoroughly enjoy sharing the animated TV specials of the '80s I remember watching with my kids now. But let's face it...some of those Christmas specials and episodes were pretty ridiculous. The evil forces of animation somehow decided to take a break from world conquest and instead steal toys, kidnap Santa, and even help the good guys spread Christmas cheer. Oy vey.

Now, as a kid, I wouldn't have given a second thought to Gargamel singing along with the Smurfs to help save some kids. But watching these crazy Christmas episodes with my adult brain, it amazes me how much spiked egg nog the writers must have consumed to come up with these outrageous stories. As much as I treasure each of them in my childhood memories, I'd just as soon get a lump of coal in my stocking than watch some of these episodes again. Here are 6 times that '80s cartoons should've left Christmas alone.
G.I. Joe: A Real American Hero "Cobra Claws Are Coming To Town" (1985)
It's definitely not out of the ordinary for the military to spread holiday cheer with programs like Toys For Tots. But what is strange is that G.I. Joe wasn't upset for only filling up one "happy holiday wagon" of toys to call for invasion on an American city. (Maybe they just need a better PR department?!) Cobra's march of miniature soldiers to invade G.I. Joe's headquarters was actually the most normal thing about this episode compared to secret snowdrift storage lockers and gigantic parrots squawking "Merry Christmas!"


Rambo Force of Freedom "When S.A.V.A.G.E. Stole Santa" (1986)
If it wasn't crazy enough that an R-rated movie franchise had its own cartoon, Rambo: Force of Freedom made it easy for kids to get confused about Santa's origin. Not only is "Santa" a friend of Rambo, he's actually a former weapons manufacturer who was rescued and now makes toys for orphans in Colorado. The evil S.A.V.A.G.E. team decides they need Kris Kaufman's former skills to produce some exploding "presents" this year and kidnaps him. I'm not sure what's more ridiculous, the amount of rocket launcher and grenade use in this Christmas special or Rambo's lack of proper clothing in a snow storm.
"The Smurfs Christmas Special" (1982)
Kidnapping...Sabotage...Extortion...No, I'm not talking about everyone's favorite Christmas action movie Die Hard. Several years earlier, the Smurfs combated the Christmas crimes of a revengeful magician (not with uzis) but with just a song of love. Kidnapped and facing life in the netherworld, the Smurfs enlist the forest grinch Gargamel to help sing their goodness to make the badness go away. So if singing happy songs combats evil, why isn't the Smurf's "La La La" song enough to keep Gargamel away the other 364 days of the year?


"He-man & She-Ra A Christmas Special" (1985)
Following the Smurfy tradition of villains taking a holiday from evil, Skeletor reluctantly helps a couple kids and their pet to have a Merry Christmas. Instead of singing carols though, Skeletor uses his power to defeat Horde Prime alongside He-Man and She-Ra. So, with the evil "Skullface" overcome with the Christmas spirit each year, does this mean the Sorceress added him to the Grayskull Christmas card list?

After Ecto-1 breaks down in upstate New York, the crew finds themselves timewarped to 1800s England and searching for someone to call. They stumble onto a man being terrorized by three ghosts and of course, do what they do best to save him. Come to find out the man is Scrooge and their good deed creates a Christmas space-time continuum disaster of Biblical proportions. Back to the future, Christmas has now become filled with Scrooge-worshipping grinches and it's up to the team to travel back to the past and unbust the ghosts of time. I'm pretty sure this episode was a recurring Marty McFly nightmare.


Christmas Comes To Pac-land (1982)
And speaking of ghosts, if ever there was a place for time-travelling Ghostbusters to appear...I mean, busting the ghost monsters for good would've done the television world a great service! We did learn though that ghosts are number two on the "what reindeer are most afraid of" list (right behind Larry The Cable Guy in an orange vest) as Santa's sleigh crashes into a pac-snowdrift. Stranded and vandalized in Pac-land, Santa enlists Pac-man to come to his rescue. His master plan? Guilt trip the ghost monsters to leave him alone on Christmas and then get all the reindeer hopped-up on power pellets to speed deliver the presents. Sounds fool-proof to me.
Newer
Older
Powered by