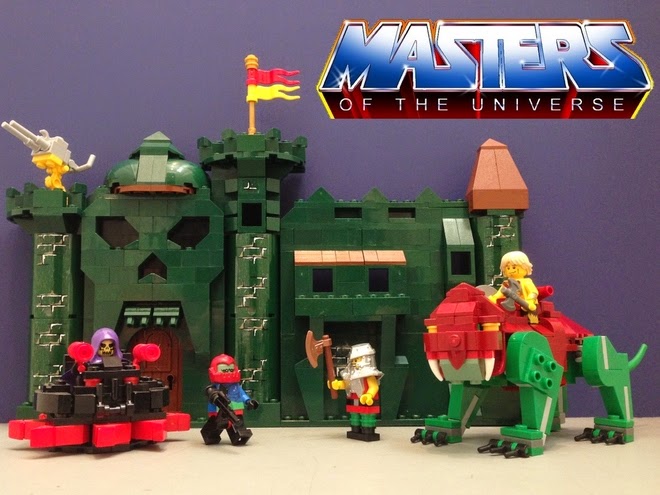 Over the last day or so, the internet has been buzzing about a Golden Girls project on LEGO Ideas. Remarkably, it has achieved the 10,000 supporters necessary for an official review in just about 3 weeks with the majority coming in the last day or so. (when I supported yesterday it was around 5,000!)

With my brain set on LEGO this week, I thought I'd scan the site for some other deserving '80s projects. Here are eight more that I'd love to see hit 10,000 supporters...

The Attack on Grayskull by Hobbes


I'm dying to get a Masters of the Universe set of any magnitude. There are a few on the site but this one was recently chosen as a staff pick. To go with the 4 mini-figs pictured, the creator just added Teela and Beastman as well. With 303 days to go, it has just 751 supporters so MOTU fans need to jump on board!

Sega Classic Arcade Machines by SpacySmoke
I featured this one on The Weekly Links about 2 weeks ago. Thought this was a great idea to use the cockpit-style cabinets that we all loved to sit in arcade. The creator has 9 different machines along with a few mini-figs. Thanks to recent publicity, this project is up to 3,630 supporters with 330 days left. Great chance to reach the goal!

Johnny 5 from Short Circuit by Steven1980
Love this one! Very accurate to what I remember in the movie. Unfortunately there is only 20 days left on this project and 2,489 supporters. Odds are against this one reaching it's goal, but still worthy of your support.

Knight Rider by Stanley-Efu
As of right now, there are 12 different Knight Rider projects on LEGO Ideas! Kinda hard to choose which one to support but this one has the most at 1,447 but with just 20 days left. I've also supported the FLAG Mobile Unit project as well which could be fun if there was a K.I.T.T. to drive in!

The Princess Bride by BrickBelt
The characters look great in this project and I like that the display set incorporates many scenes from the movie. There is still quite a bit of time left with 275 days to go which it will need since there are just 204 supporters currently.

E.T. The Extra-Terrestrial - Return Home by tjspencer1
You can really tell that a true fan put this project together with the detail on the characters and buildings. The set is also created to feature several scenes from the movie. Current supporters is 2,217 with 20 days left.

M.A.S.K. Thunder Hawk by mc2k13
My support of a M.A.S.K. comeback is endless and would love to see Hasbro do ANYTHING with the franchise. With Transformers and G.I. Joe under the Kre-O building empire, it's unlikely that LEGO would produce a Thunder Hawk, but it still deserves support! Just 116 supporters with 314 days left. C'mon M.A.S.K. fans!

I've noticed quite a few projects stuck on 20 days. They appear to be more than a year old and I guess the LEGO Ideas admins have not pulled the plug on the project quite yet. I would still support them as maybe they are hoping to hit they'll eventually hit 10,000. Find more? Post a link in the comments!
Newer
Older