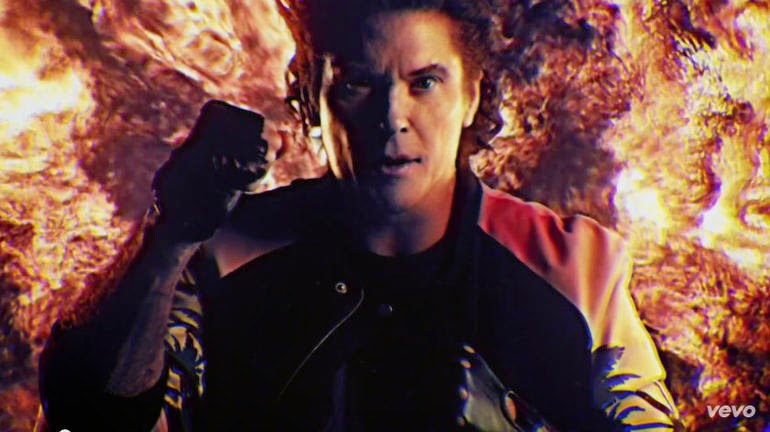 It's Friday and good to be a fan of the '80s. David Hasselhoff has officially redeemed himself from that recent montage performance on American Idol with an explosion of '80s greatness. We all remember his music career that took off in Germany...and it has returned!

In early 2014, filmmaker David Sandberg successfully funded his movie Kung Fury on Kickstarter by more than tripling his $200,000 goal. Backers have been anxiously awaiting the release of the movie which is now set for May 29, 2015, but they were given a surprise release yesterday. The music video for "True Survivor" from the film's soundtrack was released to YouTube featuring '80s icon David Hasselhoff. I can't really describe the amount of awesome in the video other than it made me forget about the second Star Wars: The Force Awakens trailer that also dropped yesterday. Watch for yourself and meet me on the other side...

How epically rad was that? The song is now available on iTunes and Spotify. Here's the lowdown on the movie that will be released for FREE on YouTube:


KUNG FURY is an over-the-top action comedy written and directed by David Sandberg. The movie features: arcade-robots, dinosaurs, nazis, vikings, norse gods, mutants and a super kung fu-cop called Kung Fury, all wrapped up in an 80s style action packed adventure.
Kung Fury takes place in a variety of exotic locations; 1980s Miami, Asgard and Germany in the 1940s, to name a few. With a limited budget to work with, we had to solve this by shooting most of the scenes against a greenscreen backdrop.
Kung Fury was funded mainly through a Kickstarter campaign, where people from all around the world showed their support for this crazy project. David worked on the film for a more than a year with almost no budget but a strong vision, with the help of friends and family. Most of the film has already been shot, but additional filming and lots of visual effects remain to be done.
The film will be around 30 minutes long and released for free on the internet.

And if that's not enough for you, the soundtrack is shaping up to be equally entertaining for retrowave fans. Mitch Murder has already released the film's theme on Soundcloud. Listen now...