6 Things We Loved About 'Press Your Luck' And The Whammy 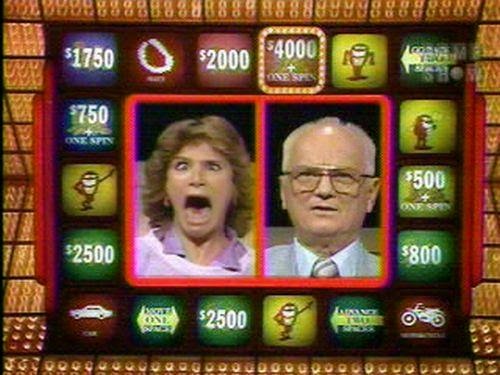 One of my all-time favorite game shows was Press Your Luck, hosted by Peter Tomarken and starring the "Whammy" who bankrupted contestants. I vividly remember watching the show when I'd be home from school or afternoons when it was syndicated on the USA Network.

It's original run was from 1983-86 when I was 7-10 years old, the perfect time to attract Saturday morning cartoon addicts. The animated Whammy character was the reason we children of the '80s LOVED the show. We didn't care how much the contestants won...we just wanted to see the Whammy take it all away! But whether you were a sadistic kid like me or an adult who loved the thrill of winning "big bucks", Press Your Luck really delivered the goods.

Here are 6 things we loved about Press Your Luck that made it so much fun to watch for kids and adults alike...


Pop Culture Whammies - Several of my favorite Whammies were based on (or referenced) people from pop culture. The one above featuring the Boy George Whammy was my favorite. Others included Elvis, Cyndi Lauper, and Michael Jackson. The Breakdancing Whammy was pretty good too.

Spin Battles - One of the great elements of the show was that contestants were not only battling the board, but occasionally battled each other by passing spins and hoping their counterpart would land on a Whammy. The example above is one of the best "spin battles" in the history of the show.


Contestants attributing loved ones to a spin and then Whammy - The common phrase for contestants to shout during spins was "big bucks and no whammies!", but some people (like the first woman in the above video) would channel their loved ones for good luck. Others even brought their church into the mix like they were playing for charity or something. As if we needed any more reason to laugh, but thinking about the confrontation of these unlucky people when the contestant got home, made the situation even more funny.


The extended freak-out session the winners received at the end - Instead of cutting right to a commercial when the game was over, the theme music would play for about 30 seconds and we got to witness a pure freak-out session by the winner. Above are some of the best reactions to beating the Whammy.


That Guy Who Figured Out The Pattern - I vividly remember watching the Michael Larson episode as a kid. I stayed at a neighbor's house in the summer while my parents were at work and remember watching the dollar sign disappearing on Michael Larson's board. I couldn't imagine someone winning that much money with a chance to lose it all in one spin! Several years ago when the Game Show Network first became popular, one of the first appointment shows was the documentary that revealed exactly how Michael Larson won so much money. It remains as one of my favorite documentaries on '80s culture.

When contestants danced along with Whammies - Some contestants were good sports and just were glad to be on the show (like the first guy in the video above.) That attitude showed through when contestants would dance or sing along when landing on a Whammy.

Want more? Check out the myPYL YouTube channel for 600+ complete episodes of Press Your Luck!
Newer
Older
Powered by