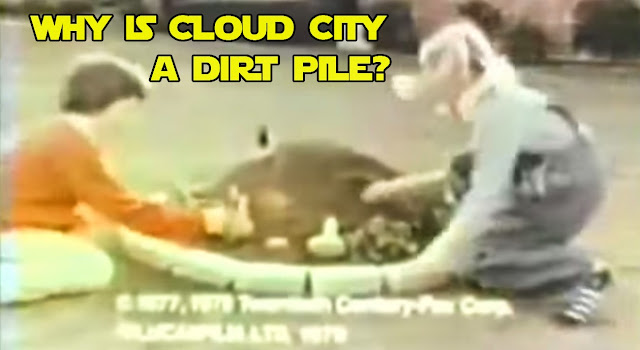 The Kenner Star Wars toyline that ran from 1977-85 is arguably the greatest in the history of action figures. Over that period of time, over 100 different characters were produced with sales that topped $300 million.

What added to the sales was seeing the toys featured in movies like E.T.: The Extra Terrestrial and more importantly, TV commercials played during our Saturday morning cartoons. But after skimming through these advertisements now, it seems the producers might have skipped some of their Jedi training. Of course, as kids we wouldn't have cared if William Shatner was peddling us the toys but Kenner could have used the force a little more in their ads.

Here are 7 toy commercial fails for your amusement on Star Wars Day.

The Worst Chewbacca Impression In History
I'm sure Kenner was literally pulling kids off the streets for these ads and weren't looking for Emmy-winning performances, but the Chewbacca impression from this Return of the Jedi commercial is bad. Honestly, I wouldn't have singled out the "Rawr!" at the :07 mark if the kid doing C3PO's voice hadn't performed his part so well! Chewie's voice was pretty unique, but wasn't their always a kid in your circle of friends that could pull it off?

Did This ESB Commercial Give Away The Plot For ROTJ?
The Millennium Falcon vehicle was originally released with the Empire Strikes Back collection with Kenner continuing production through Return of the Jedi. The commercial above from the original release ends with the boy shouting "onto the Death Star!"...wait, what? Did Han and Chewie take on the Death Star in Empire? No. Then why are they attacking?? SPOILER ALERT!!!!!!!

Ewoks Don't Strangle Each Other When They Dance
From the green moon of Endor (its the "Forest" moon, mister announcer guy) comes the next commercial for the Ewok Family Hut. As much as we won't admit it now, we loved the Ewoks in Return of the Jedi and probably danced a jig if you got one for Christmas in 1983. The problem with the commercial is that the kids' stranglehold dance looks nothing like the Ewok sway in the split screen footage. Looks like the boy is ready to choke slam sissy on top of the family hut in the foreground.

I Don't Remember Cloud City Being A Dirtpile
"Hey sis, let's pretend we're in Cloud City! Where should we play? How 'bout the flower bed in the front yard!" Seriously??!! Cloud City never got a playset to use with all the cool ROTJ figures, but why would you film a commercial for them in Yoda's backyard?

When Exactly Was The Han Solo Speeder Bike Chase?
So you take the time to split screen the pivotal Ewok dance scene in a commercial, but you totally screw up the speeder bike chase. It was Luke and Leia on the speeder bikes! (Face palm) It's hard to believe that Lucas wasn't the technical advisor on these Kenner commercials.

When Luke Took Ben Kenobi Hostage At Gunpoint
I'm a little fuzzy on the scene when old Ben comes back from the dead and is chased by Yoda's pet snake. But this Empire Strikes Back figure commercial apparently taps into some alternate scenes which also includes Luke being fed up with Jedi training and threatening Yoda and Ben Kenobi with his blaster pistol.

Tauntaun Ride-Off Into The Sunset
The producer of these commercials sure had a flower bed fetish. At least they got they dialogue correct with attempting to save Luke in this commercial for Empire Strike Back Tauntaun figures. But I definitely don't remember both Tauntauns riding off into the Hoth sunset after that mission. If they really wanted to be accurate, they would've used the Tauntaun personal space heater version.